The first problem in my mapmaking of the Odyssey came when I finished the stitching, pulled all the loose threads to the back of the work, and proudly showed it off to my husband.  As I displayed it, I realized that while the map showed the entire Mediterranean, it was hard for me to orient the part that is now Turkey to the world map in my head.  Except for the tuft of thread marking Troy, I couldn't figure out what I was looking at -- where was the Dardanelles?  the Sea of Marmara?  where was Istanbul? 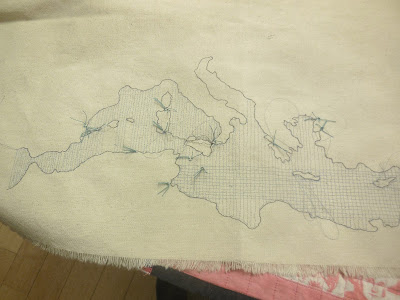 I realized that for me, at least, I needed the Black Sea on my map to help me know what I was looking at.  Fortunately there was enough room on the canvas to add it.  So I went back to Google Maps and printed out the sheets to paste up (a brief dead end when I found that my printout was at the wrong scale).

Again, I cut out along the shoreline, positioned my template against the already-stitched sections, and added the seas. 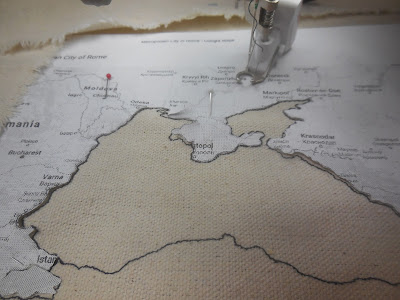 How to get the complicated route onto the piece?  I didn't want to put any visible markings on the front of the work, and I also wanted the route to be more prominent than the background map.  I solved both those problems by flipping the canvas over and marking the route on the back in pencil.  I put a heavy thread in the bobbin and stitched from the back. 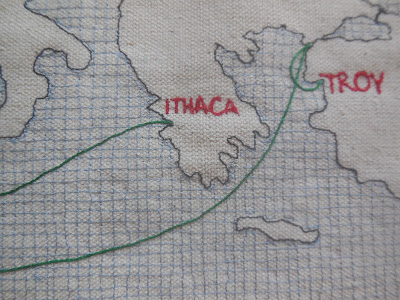 I added lettering to mark Troy and Ithaca, the two end points of the journey, and the title "Odyssey."  It looked pretty good.

But wait.  Stay tuned for my final adventure in fiber art.
Posted by Kathleen Loomis at 5:12 AM