I went to a meeting at a downtown church, and was intrigued to find two glass-front boxes on the sidewalk in front.  One was the standard Little Library box, with some books in it, but the second was labeled "Blessings" and contained a couple of bars of soap and some packages of cheese crackers.  The neighborhood gathers a large number of homeless people, with various overnight and day shelters and soup kitchens, as well as freeway overpasses and secluded camps, so this seemed like a good way to dispense small useful things to those in need.

The next time I was in the neighborhood I brought a big bag of hotel soaps and shampoos that had been accumulating in my cupboards.  The box was empty and I was happy to restock it.  I was corresponding with my daily email pal and remarked that for those at the lowest end of the ladder, soap could be a luxury.  She wrote back, "but where will they use the soap?" 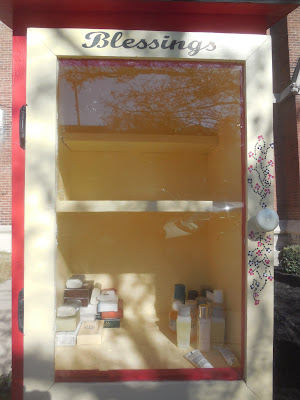 I decided I should be responding to more immediate needs, so the next time I was at the grocery store I bought eight jars of peanut butter.  That seemed like a good offering: nutritious, won't spoil, stand-alone if necessary.  I drove past the box a couple of days later and the PB was all gone, so apparently somebody wanted it. 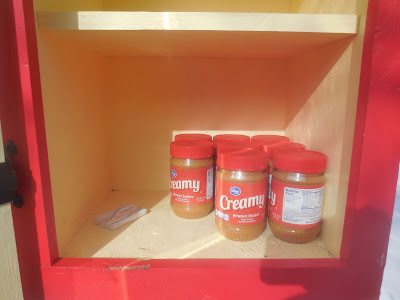 I mentioned this to my son, who has way more knowledge of downtrodden people than I do.  He said food was always welcome, but maybe I should think about some other supplies that might be hard to get and warmly welcomed.  He suggested bandaids, painkillers, toothpaste and toothbrushes, tampons, hand sanitizer, wet wipes.  Also shoe sole inserts, because when you can't afford a new pair of shoes, the inserts make the old ones a bit less awful.  And, of course, sox, underwear, gloves, toboggan hats.

On our next grocery trip, while my husband browsed the produce, I browsed the pharmacy and found two bags full of things for the blessings box. 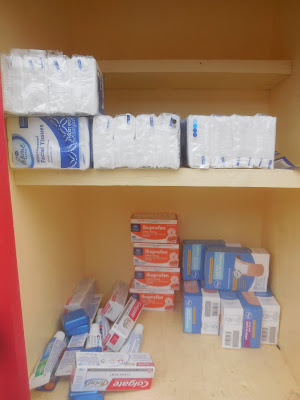 We've always given money to several agencies that help the homeless, but somehow I feel more personally connected now that I can put things into the box and see that they have been taken and used.  I'm going to try to keep that box stocked; maybe next time, a whole case of PB, and a lot of tube sox.

Perhaps there's a blessings box in your town; if so, I recommend it for your charitable impulses.  Especially on very cold days.

Posted by Kathleen Loomis at 11:49 AM