One of my objectives in defining my daily map art so loosely was that I wanted to be able to experiment with different mediums, techniques and concepts.  If you're committed to a certain size and shape and kind of support every day you can't always explore a wild idea.  But this year I am empowered to do anything I want. 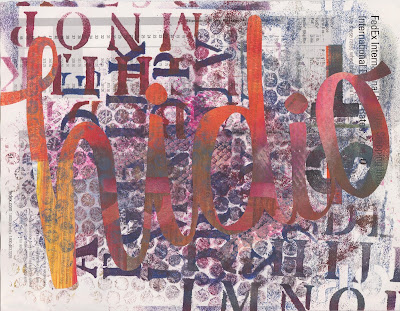 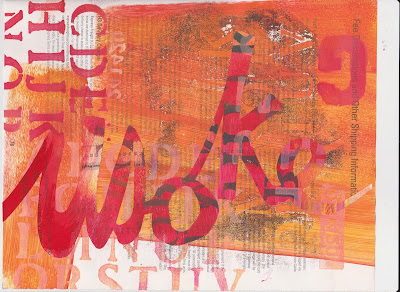 Years ago I made these two studies in a workshop led my my dear friend and wonderful artist Suzi Zimmerer.  She is a master of surfacing paper: using paint, stencils, and other print techniques she builds up complex patterns and then uses the paper for collage.  I made these papers using alphabet stencils, then cut out nonsense words and collaged them on top so the lettering is almost illegible.  I had always liked the effect and wanted to do more.

So I had the idea to cut words out of maps.  Leafing through one of the old road atlases that I'm cannibalizing for art, I stopped at Michigan and got the idea to focus on Bay City, where my father was born.  Inspiration: I would cut my top collage layer from Texas, which also has a Bay City, and juxtapose the two places. 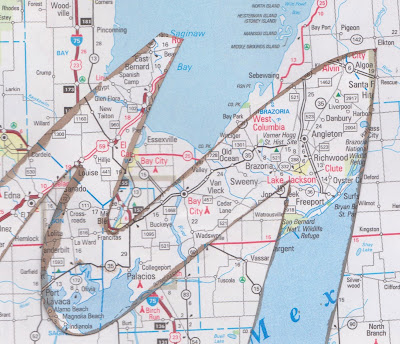 I liked the idea of letters blending into the background, but after I cut my script out of Texas and laid it on top of Michigan it blended in so well you couldn't begin to find it.  Note to self: in future, cut the layers from different atlases so you get different color and density effects.  But for now, I outlined the cutout letters with walnut ink before I pasted them down. 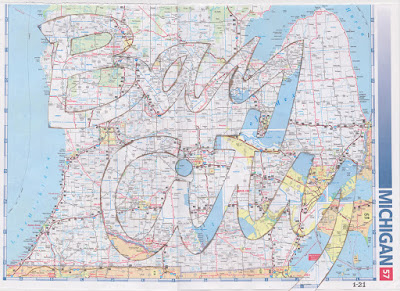 Verdict:  I love this concept and would like to try it again, even though it was time-consuming.  Not sure it worked as well with the maps as it did with the surfaced paper, but maybe I can combine both -- how about first surfacing a map with various paint and print effects, and using that as one of the layers?  I'll try that some day.