Following our discussion of leaving comments on blogs, I decided I need to be more rigorous about responding to readers.  Yes, I could email you privately if you leave a comment, but then nobody else would see what I have to say.  So I'm going to try a new plan: on Saturday night I'll try to respond to any loose ends that have come up during the week.

Jenny wrote:  "I like text too and I enjoy experimenting with changing and distorting it.  Do you know the work of Idris Khan?"  No, I didn't know about Idris Khan but a fast google makes me want to spend more time looking at his work.

Sandy inquired about my cataract surgery -- it's scheduled for this coming Wednesday.  While I don't look forward to the long interim before both eyes get fixed and new prescription glasses are ready, I really need to do this, so let's get on with it!

Vivien wrote:  "I'm encouraged to read that you think a blog is still a viable way to connect with others. For so many it seems to have had its day and folks are onto the next big thing."  Yes, I've noticed that blogs are becoming less popular and certainly less trendy, while many people have moved on to Instagram and Twitter and who knows what else.  But the blog still works for me.  I like to talks about things in more depth and with more thought than you can do on the newer platforms.  If communication without hashtags cuts me off from much of the great world population, so be it.  I'd rather have 363 people who read than 30,000 who like pictures and 140-character remarks.

And I'll also show you my favorite miniature that I made during the week. (I've decided that's a more dignified way of referring to my second daily art project than saying my favorite piece of stuff that I put in a plastic bag.) 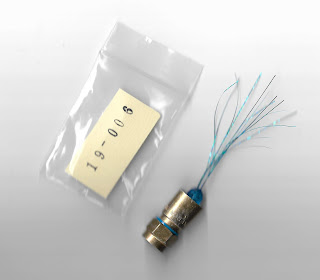 This one features half a sparkplug (I think) that I found on the street, dolled up with a bead and a blue holographic thread topknot.  For scale, the little plastic bag measures 1.5 x 2 inches.

Posted by Kathleen Loomis at 11:06 PM