Isaac wanted to sew something for his mother for Christmas, so I cut a piece of denim from my jeans-for-art box and he rooted around through a bag of scraps to make a collage. 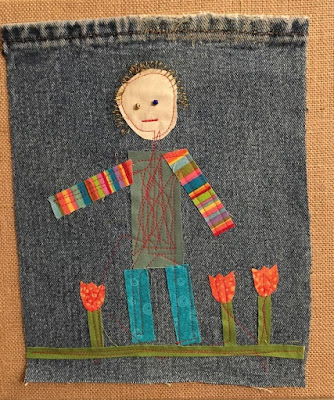 My contribution was to cut the zigzags in the top of the tulips and to stitch on some curly gold wire that we found on the worktable for hair.  Isaac did the rest.  Now that he is eight years old he is an old hand at the sewing machine, having made his first collage three whole years ago!  I know he's getting big because he no longer has to put the foot pedal on a shoebox; a thick book does the trick.  And he wondered if he could set the speed control up a little higher this time....

He wanted to use beads for eyes so we had to do a side project for him to learn how to sew on beads before he could do it on the gift.

In the past we have just made sleeves on the back of his collages and suspended them from a piece of coat-hanger wire or a chopstick, but since this was a Christmas present I thought we should splurge and mount it on a burlap-covered canvas, which I did for him (and did a number on my left wrist by having to hold it at an unnatural angle to avoid sewing into the top stretcher bar).  Since I discovered this product at my local craft store I have been using it for various purposes.  Surprisingly, the burlap has made a good backdrop for delicate silk collages made from old kimono as well as art brut pieces such as this one.

We look forward to our next project.