Daily art with a kick


As a lover of daily art, I was taken by a story in yesterday's New York Times about a woman in Germany who got fed up with delays in her daily rail commute into Munich, because of track repairs.  So every night when she got home, she would add two rows to a scarf she was knitting.  If the delay was less than five minutes, she would knit gray; for up to a half hour, pink; and for more than that, red. 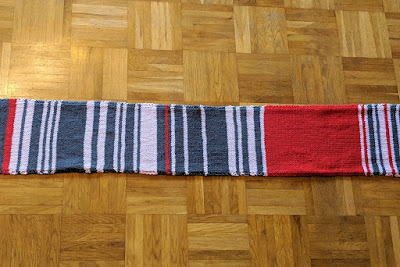 She did this for a year.  Then her daughter posted about it on Twitter and the scarf went viral. On Monday it sold for more than $8,000 on eBay, with the proceeds going to a charity that helps people at train stations.

What a great daily art project!  The track repairs aren't done yet, so she's making another scarf this year.