When FNF was started, the show ran early in the year, but after a while the Carnegie Center decided to change the date.  Winter weather made faraway visitors think twice about driving, and the entry process was too close to the holidays.  So the show tried several different schedules -- February, March, April, July, May.  After visiting Quilt National several years ago, the museum director and curator thought it would be a good idea to overlap FNF's dates so people might be able to see both shows in a single road trip.

This year, there are many overlaps between the two shows, and not just in scheduling. 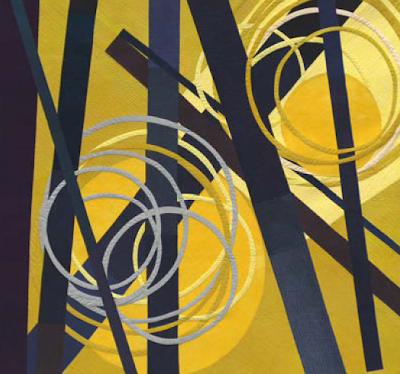 - Margaret Black, whose quilt Curb Appeal 6 was a prizewinner at FNF, had the best in show quilt at the last QN two years ago, even though I wouldn't have known these two works came from the same artist had I simply seen them both on a wall.  (click here to see it)

I haven't had a chance to see Quilt National yet this year, although I hope to do so in July en route to a family reunion.  There may be other overlaps and cosmic coincidences yet to be discovered; if I find some, I'll let you know!