After I wrote about the prizewinners at Form, Not Function, Vivien left a comment:  "Cool that you got to serve as a prize judge.  How did that compare to a time when you've been a juror?"

The hardest part of jurying comes at the bottom end, the quilts that do or don't make the cut.  The top end is a no-brainer: the pieces that are really good and get chosen with hardly any discussion at all.  It's at the low end that the arguments and persuasion and horse-trading occur, either among your fellow jurors or with yourself if you're the only one.  It's hard to choose among three or a half-dozen pieces that are equally good, but you're limited to a certain number of quilts or a certain amount of wall space.

Sometimes the hard part of judging also comes at the bottom end, if the big winners are obvious but a half dozen seem equally almost-great, vying for three or four prizes.  Which one gets the money, which one gets the honorable mention?  But other times the hard part comes at the top end, when two or three are clearly the best of the bunch, but what order to rank them in?  As always, arguments and persuasion.

One important difference between jurying and judging is that jurying always happens from images, while judging often happens from the actual work on the wall.  I know some big shows, most notably Quilt National, select winners from images too, because they need the lead time to publish catalogs and summon winners to the opening, but I've always thought it's much better to be able to see the work in person.

So many times I've seen quilts on the wall after jurying them in, and been amazed at how they differ from my mental picture.  Perhaps one is much larger or much smaller than you thought (yes, you can read the dimensions, but the image up there on the screen has its own presence that is quite independent).  Perhaps one has sloppy craft or hangs wonky on the wall, qualities that weren't apparent from the great professional photo but greatly detract from its impression in the gallery.  Or the opposite, perhaps one didn't photograph well but is a knockout in person.

On balance, I think it's harder to be a judge than a juror. Others may disagree.

Here's my favorite miniature of the week: 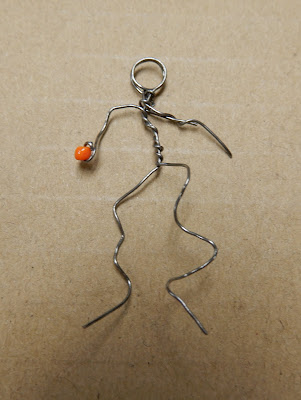 Posted by Kathleen Loomis at 11:19 PM