After I wrote about going back and improving the three small machine-stitched houses, Margaret left a comment that "had you not been DONE with them, I might have suggested a cord-and-gel-medium horizon line, knowing full well that horizon lines are not to everyone's taste."  I am generally a big fan of horizon lines, but these houses appear to be sited on the top of hills, with the viewer sited considerably downstream, so that the top of the artistically unmowed grass constitutes the horizon line.  At least that's my story. 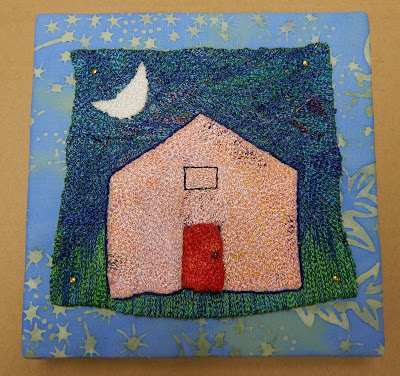 Now that they're mounted on batik-covered boards, I think they have come a ways in terms of complexity.  I did feel I had to improve them (as my readers so rightly suggested) a bit, but there's also a point at which you have to say "enough," this work has exhausted its rightful claim on further effort.

I do like the dense machine stitching, combined with the simple, stylized house shape.  I might return to this series sometime and try for a more nuanced treatment, but not now.

My favorite miniature of the week: a bit of wool roving needle-felted onto a piece of wool felt: 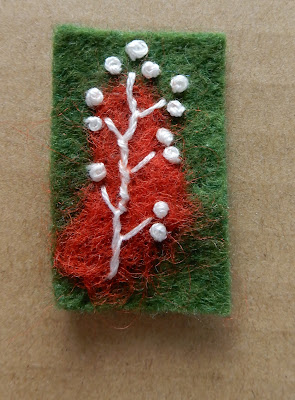 Posted by Kathleen Loomis at 11:38 PM