I don't remember how I got this idea, to make individual letters that would start as dense collections and then fall apart as they tumbled downward on the page.  The first few I made were with a bunch of new polymer-tip pens in bright, cheery colors. 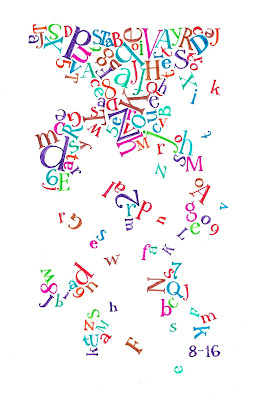 I loved the effect, and the bright colors, except that these pens were relatively thin-line, and I found it hard to get a uniform wash of color on the larger letters with so much drawing back-and-forth.   Also it took quite a while to draw these letters. 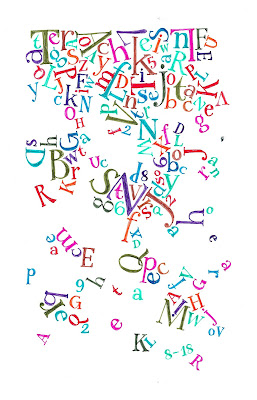 So I started making these compositions with a dip pen.  I used my springiest nib, one that effortlessly gives you swoopy lines that go from thin to thick with just a bit of extra pressure.  For most of the letters, I could draw thick lines with just one pass, and the curved letters like S and B looked beautiful as they swelled and ebbed. 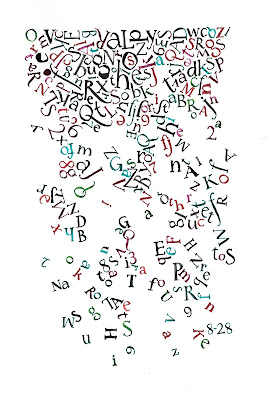 It was faster to make these letters, but it also took a while for the ink to dry, so I had to do the day's page in several different sittings.  Particularly nice when I started in the morning, did one color for a bit, went away and came back later for a bit more writing. 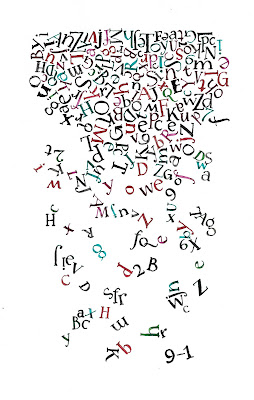 My ink supply is all dark colors, so these compositions aren't as light and bright as the first ones, but I think they're more sophisticated.  Now I'm at the same point that I was a couple of years ago when I was making tangles in my daily drawing.  Namely, is it a good plan to keep making the same drawing over and over again, day after day, even if you think it's beautiful and it's fun to do?  Are you losing the opportunity to try something new if you just repeat your favorite theme?

What do you think?
Posted by Kathleen Loomis at 4:45 AM