The Joy of Mending

Checking out Alison Schwabe’s blog this morning, I was intrigued by her comments about an exhibit she saw years ago called “Objets Blesses.” It showed things from Africa that had been painstakingly mended (she posted a photo of a drinking gourd mended with leather) and the point was that people mend things that are important to them – and that “mending therefore confers a higher level of value to the object.”

That resonates with me, as I am an aficionada of mending. With a husband and two sons I have rarely been without mending opportunities in the last four decades and I am really good at it. Once I told a young teenage son that he was forbidden to wear that pair of jeans out of the house unless he let me mend them. He reluctantly said OK, “but only if you maintain the integrity of the rip.” So I did, by putting the patch on the inside and largely hiding the mending stitches underneath the floating threads of the original hole.

Only last weekend I noticed frayed edges on the bottom of my husband’s pants cuffs as they emerged from the dryer, and spent a comfortable hour fixing them. Trimmed off the frayed bits, opened the hem, put a piece of muslin behind the fold line and reinforced it with stitching, then turned the cuffs a quarter-inch higher and rehemmed. I often mend holes or spots in sweaters or knit shirts with ultrasuede. These below do double duty of holding up cuffs that would droop if left to their own devices. 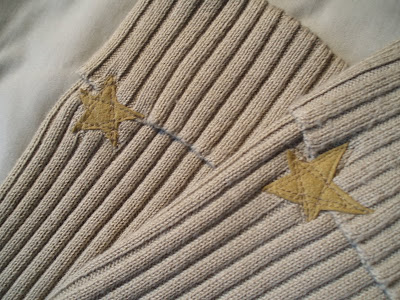 Usually I restrict the stars to women’s clothes (I call it a designer detail, and have received oohs and aahs) and stick to rectangles for men, but I did put a high-contrast heart on my husband’s sweatshirt when the neck ribbing started to disintegrate. The grocery clerk loved it – “Look at this heart! His wife sewed this heart on his shirt!”

Here’s a purely utilitarian mend, occasioned when I was sewing the facing on a quilt and managed to snip open my own shirt instead of snipping the thread. This was a purchased shirt, so I didn’t have scraps stashed away. I took off the pocket, cut a piece of fabric for the patch and replaced it with something else, then incorporated the patch underneath the button. I like to think it looks deliberate, like one of those safari jackets with doodads that you don’t understand but must have some purpose. 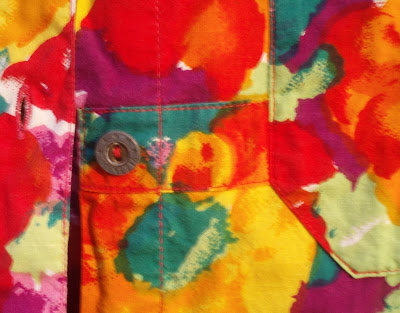 We lived in Germany in the early 1970s, at a military base with a pathetically haphazard library. I found a book published in Great Britain during the war to tell all about mending. And this was heavy-duty – not just how to mend sox, but how to transform a worn-out man’s coat into children’s clothes and the like. I was fascinated, and imagined myself creatively and frugally mending everything in sight. It’s just like I consider myself as a potential pioneer woman. Thank heaven I don’t have to mend socks and transform coats into kids’ pants and chop wood and kill bears – but I bet I would have been great at it.

But back to Alison's point about the mend conferring value on the object.  That's one lovely concept that is 99.9% absent in today's consumption-mad world.  Sure, the grocery clerk loved the heart on the sweatshirt, but in general a guy in mended clothing elicits pity as a victim of poverty, probably homeless if not outright wacko.  Maybe I can fob off my ultrasuede patches as designer details, and cover up the stains on my shirt by overdyeing, but I feel latent guilt when I do so -- will people see my creativity or just my inner bag lady?  Most of the time I wear the shirt anyway, but it nags.

For some time I have been wrestling with the concept of mending as art.  I even have the title for the show:  "Mended In Gold."  Haven’t figured out how to execute it, but I have started to save my world’s greatest mends after the garments nevertheless wore out. Some day….
Posted by Kathleen Loomis at 9:36 AM