Leftovers, the psychological implications of

More about leftovers! When I posted about the two tops made out of the Compositional Conversations scraps, Terry Jarrard-Dimond (who organized the CC project) wrote on her blog,

What could there be about these assortments of scraps that is attractive to someone? Is it because they have a history? Do these shunned remnants have some sort of built-in predisposition for coordination? Is it thriftiness on the part of the interested artist harking back to the origins of quiltmaking? Is it bravado on the part of the new scrap owner saying, "I can make something of nothing"? Or is it simply these collections of leftovers somehow speak to the new owner in a way many of us don't hear?

I also have a "thing" for scraps, but in my case, I am fascinated with the suggestive fabric outlines that are left after cutting out complex shapes. In these scrap shapes I see conversations and stories taking place with imaginary creatures or humans. So I pin the shapes onto white backgrounds and let the stories emerge with a little embroidery to help them along. I have been experimenting with letting my "dark side" do the talking. It seems I harbor many monsters that want to get out. This is a good way to release them and the results are so interesting, not anything my nice, ladylike rational mind could produce.

Maybe working with leftovers can be an artistic Rorschach test to bring out psychological issues that are better concealed in more deliberate works of art.

In my own case, let me lie down on the couch and run through Terry’s questions.

1. Yes, I like the fact that the scraps have a history. I especially like leftovers that provide hints about the original project, as in Julia’s work (which I took the liberty of tracking down on the web). I used to get wonderful garbage bags of scraps from Juanita Yeager, and frequently would take expanses of her pieced fabric and rework them. 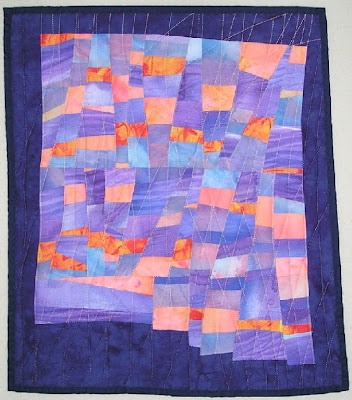 In this one, Juanita had sewed the pieces together in horizontal rows before she decided she didn’t like the piece. I slashed her work vertically and reassembled into a more complex pattern. 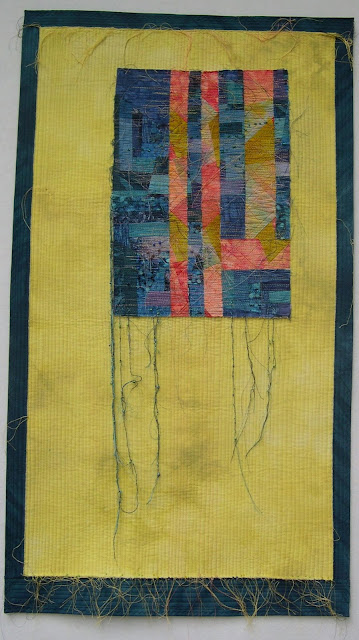 In this one, Juanita had cropped an already-quilted piece, slicing off one or two inches from each side with a rotary cutter. I put the pink and blue scraps together to make the center of the new work, mounted it on the green background and added more quilting. 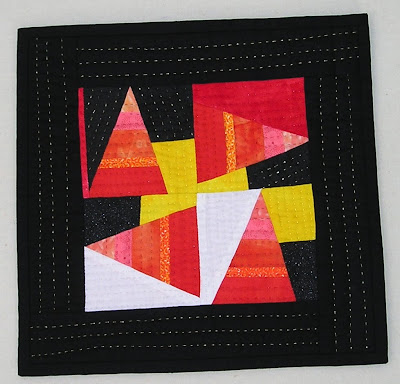 Here's a piece using leftovers from Marti Plager.  She had made the red/pink strip piecing for a class sample and gave me the extra.

2. Sometimes the remnants from a previous project do come pre-coordinated, which means you don’t have to think that hard about putting them together. Not so with the CC leftover project: every color on the wheel was in the box with the exception of pastels. In fact, my frustration with the yellow top is that I’m not sure I did a good job of putting so many different colors together.

3. Yes, thriftiness is a part of it. I am well known for my frugality, which some in my family would call cheapness. (see my previous post on mending)  And yes, I do feel that I’m giving a nod to the traditions of quilting when I work from scraps.

4. Yes, bravado is part of it too. It’s kind of a fiber art triple axel, like piecing narrower and narrower strips or tinier and tinier pieces than anybody else.

5. Yes, the fabric speaks to me. And I like fabric or even sewed-together rejects that have been through somebody else's hands, because that person speaks to me too, even if I don't know who she is. I have always loved to rescue linens from the flea market. I think of some anonymous woman who worked on that piece for many hours in the evenings, after a long day of hard work, under poor light, because she wanted to make something beautiful, and now she’s gone and her children can’t even be bothered to keep the doily. I feel it’s my duty to take it home so she knows that somebody appreciates what she made.

Posted by Kathleen Loomis at 6:08 PM