Why the yellow leftovers top makes me nervous


One appeal of using leftovers is that when you confine yourself to the scraps from one quilt, the color palette should already be a harmonious combination. So whatever you make from the leftovers will also go well together.

That makes it easier to put the second piece together – no pesky thinking required – and it’s particularly nice to display the leftover quilt alongside the original so you can see the DNA passed along from the first generation to the second.

However, what if you start with a pile of scraps with no obvious palette? Either because you’re working with leftovers from many different projects, or because one project included everything but the kitchen sink. The latter situation is what I faced with the bits and pieces from Compositional Conversations. The original included just about every color there is, and to make it more complicated, while most were solids, the pile included screen printed fabric, mottled hand-dyes and even some black and white stripes.

I mentioned in a previous post that in the original CC project, I stripped away at least half the composition when it came around to me. There was so much going on that it made me nervous. And that feeling recurred when I started to work with the leftovers. That’s probably why I like the red top more than the yellow one – there’s just too much happening in the yellow. 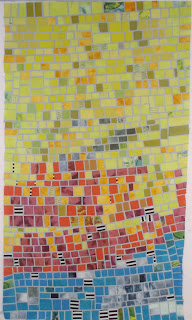 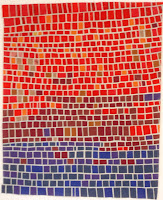 Now I’m not against quilts where there’s an awful lot happening. But I like there to be some structure that holds things together while they happen. I had thought the pieced “ladder” structure, where the narrow gray strips frame every piece and hold them in rows, would be sufficient for this purpose. But it didn’t do the job in the yellow top. Not only is there a wide variety of colors and patterns in this piece, but there is a lot of curving around and irregularity in the grid.

Grids are loved by many artists because they help hold disparate elements in place, because they make things look orderly even when there is little innate cohesion to be found. That's what I needed with this collection of leftovers.  But in the yellow top, the grid itself is broken.

I’ve used broken grids in earlier quilts in my “Crazed” series, and they worked. 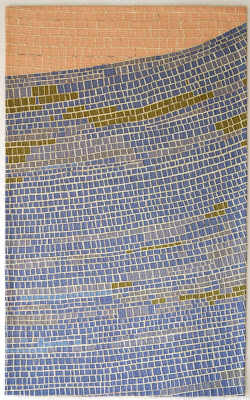 Here’s one where the grid curved dramatically. 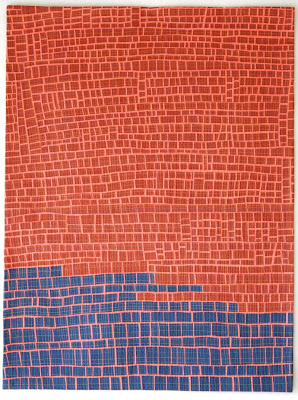 Here’s one where the grid was much more random – the “ladders” didn’t all go horizontally, and the breaks came unpredictably. But in both cases, the variation in the grid was the only action in the quilt; the color changed very little, if at all, while the grid was morphing around. In both cases there were only two color segments in the entire piece, and the subordinate one had a totally regular grid. And of course all the “Crazed” quilts that I have shown you are made from solid colors.

I’ve also made “Crazed” quilts with color variation, but the grid was quite regular. 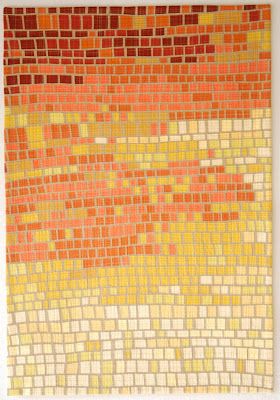 But in the yellow leftovers top, I have the feeling that too much is happening at once – both the grid and the color palette are complicated, and it got out of control.

I like the upper half of the yellow top, where there is less color variation and also less dramatic grid variation. I’m tempted to cut off the bottom half for placemats and make the calmer yellow part twice as big (or more). I might be OK with varying the grid a little more dramatically in the new parts, as long as the color palette stayed very restricted.

One word in favor of the lower half of the yellow top came from a friend of mine on the Quiltart list. She said that section looked to her like an aerial landscape, maybe a town on the banks of a river. Since I love aerial landscapes this perked me up and I might even think twice about turning that part into placemats. But I am constrained by the fact that I truly do not have a single square inch of those pink, blue and gray fabrics left, so I can’t do any improvement by addition. I’ll let you know what I decide.

Update:  Five years later I did cut off the bottom half, and I turned it into a quilt, not placemats.  Here's what I ended up with.