Last year I was part of an interesting experiment called “Compositional Conversations“ organized by Terry Jarrard-Dimond. She invited 13 other quilters to participate. Terry started by putting a shape onto a fabric ground, then sent it to the next person. Each of us in turn could add new elements or subtract or rearrange existing elements (everything was just pinned, so you could revise to your heart’s content).

I don’t think the finished product will win any design competitions, even though design was what we were supposed to focus on. But it was fun to follow along what happened each week as a new eye surveyed the situation. You can see the work in its different stages on Terry’s blog.

My part in the exercise, which came quite far along, was to remove a great deal of the composition. I tend to get nervous when too much is going on, especially when there is a wide variety of different colors, styles, fabrics, shapes and sensibilities. So I stripped the work down to a far more minimalist design.

That lasted only as long as it took for the package to get to the next person in line. I guess the others in the group don’t like mimimalism as much as I do!

As people did their thing with the work, we left no prisoners – we packed up all the fabric and sent it along to the next person. Some of us included a little extra fabric in the package, just in case somebody might want to add more shapes in the same color. As you can see by looking at all of the versions, there was a lot of fabric that showed up at one point or another.

After Terry put the composition together, I asked her if I could have the leftovers. I have been putting them together for the last couple of weeks and now have two tops ready for viewing. 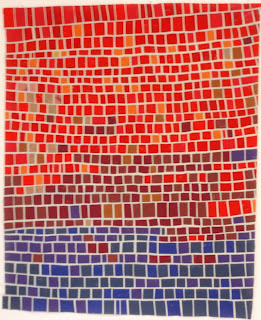 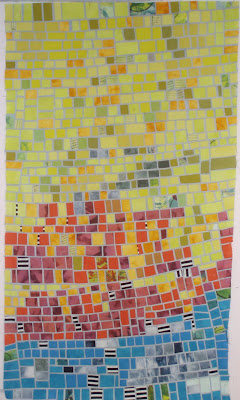 The red top is actually the smaller of the two -- 27 x 32.  The yellow top is 25 x 43.  There's more of the red, yellow and dark blue fabrics, so I could conceivably make the red top larger at either top or bottom, and could make the yellow one larger by adding to the top.

I had originally thought of making the two pieces as a diptych pair, and had carried over some of the reddish fabrics from the yellow top into the red top to link the two, but now I don't think they play well together.

I invite your comments. I'll give you more of my own critique later, and I want to write more about the whole concept of sewing leftovers together.  Thanks, Terry and my other collaborators, for the leftovers!

Posted by Kathleen Loomis at 1:55 PM