If you have any German at all, even the Berlitz guidebook variety, you will be able to translate the name of this museum as "Hamburg Railroad Station."  Yes, it used to be a railroad station (the trains to Hamburg left from here) but since they built a fabulous, shiny new station a few years ago, a couple of blocks away, the old station has been converted to a contemporary art museum.  The core of its collection is art donated by a rich guy who particularly liked five artists:  Germans Joseph Beuys and Anselm Kiefer, and Americans Andy Warhol, Robert Rauschenberg and Cy Twombly.

I have never been a big fan of Beuys, even though I identify strongly with his tendency to pick up junk on the street and call it art (perhaps this is a slight oversimplification).  His shtik has been his use of felt and fat, supposedly because he was rescued from a winter plane crash in Crimea (he was in the Luftwaffe in World War 2) by nomadic Tatars who saved him by smearing fat all over him and wrapping his body in felt.  The story doesn't hold up to fact-checking, but the shtik continues.  I do have a soft spot for artists who use felt, being a fiber type myself, and a huge sculpture of tallow on display at the Bahnhof was impressive, probably my favorite Beuys artwork I've ever seen. 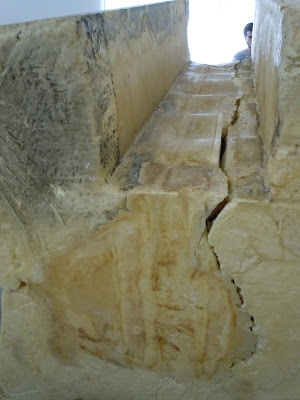 Joseph Beuys, Skulptur, die nicht kalt werden will  (Sculpture that will not get cold), 1977

By contrast, I love Kiefer and was delighted to see several paintings and a sculpture.  Kiefer's recurrent theme is Germany and the toxic fallout from war and nationalism.  Many of his paintings are variations on the image of a deserted battlefield, endless expanse of mud and waste.  I wrote about his "Hermannschlag," also at this museum, in an earlier post. 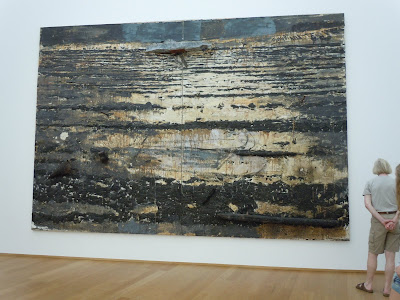 Anselm Kiefer, Hoffmann von Fallersleben auf Helgoland, 1983 1986  (H von F was a poet who went to the island of Helgoland and wrote what became the German national anthem) 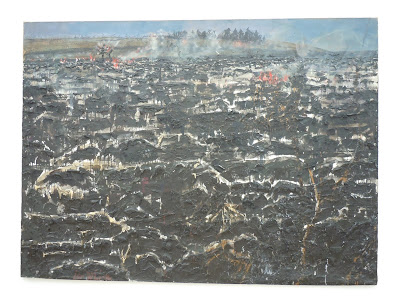 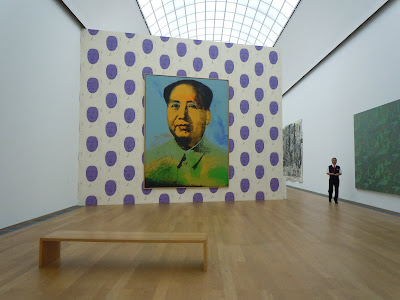 "Mao" dominates its room, one of the biggest Warhols I've ever seen.  He used the image of Mao in many different versions, including four-patch and nine-patch arrays, but this one is just the one face, vastly larger than life. (The purple doodads on the wall behind it aren't part of the painting but they sure add to the impact!)

And then there's Robert Rauschenberg, also on my top ten artist list (or maybe top five??).  I liked two of his earlier paintings, which seemed similar in their use of red, black and white. 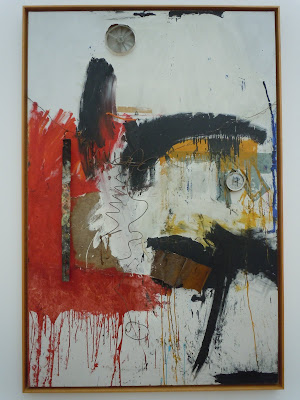 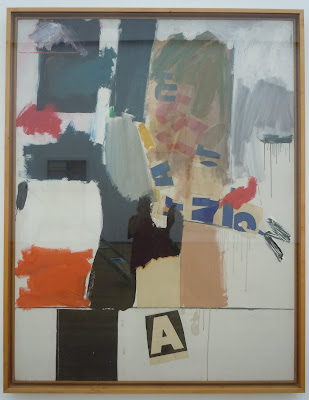 I could go on and on -- this art is world-class and there's lots of it.