The end of September means black walnut time in our part of the country; some of the chartreuse nuts are still on the trees, but others are lying on the ground ready to be gathered up.  Some are intact, others have split and turned black.  It's time to collect them and make dye or ink! 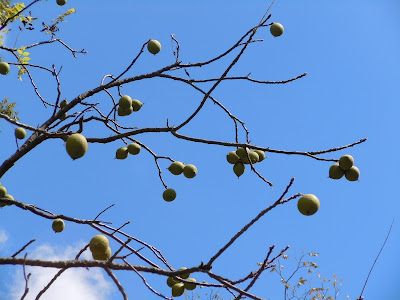 Curiously, when I owned a black walnut tree I didn't realize its surface design potential.  I would give away the nuts to a friend at the office who would painstakingly spread them on the driveway, run them over with a car to split the tough husks, and pick out the nutmeats for use in baking.

When we had to take the tree down a few years ago, I noticed that the stump oozed black sap for weeks.  I would cut a yard or so of PFD fabric, spread it over the stump and nail it down so it wouldn't blow away.  A week or two later, there was a gorgeous piece of dyed fabric -- for black walnuts are noted for their aggressive dye properties.

When I took up calligraphy two years ago I learned about walnut ink, one of the most beautiful coloring substances I've ever met.  So when fall rolled around, I decided to try making my own.  I followed directions found on the internet and cooked up a batch of ink, but it turned out to be considerably weaker than the commercial variety, so I kept it in its jar for a while in  hopes that the water would evaporate and concentrate the solution. 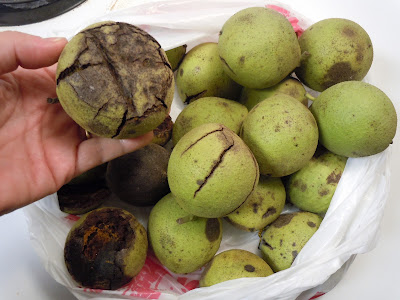 And promptly forgot about it.  Until this week, when I realized that it's that time of year again.  When we encountered lots of walnuts on the ground in the park yesterday, I decided to gather a load and see what I could do with them.  I'll share my processes and the results of my experiments, in case you have access to some nuts and want to follow along.

My first observation is that the nuts smell nice, even though they look nasty -- a faint odor that seems exactly like cardamom, one of my favorite spices.  Stay tuned for observations more closely related to surface design.

Posted by Kathleen Loomis at 6:15 AM