Last week I went to a lecture by Denise Burge, a quilter/artist who was in town as a visiting artist with the Kentucky School of Art.  Her work has been in Quilt National twice, in 2001 and 2003, and she is on the faculty of the art school at the University of Cincinnati.

She was born in North Carolina and wanted to make art about her family and her home place, and "quilting seemed to be the right medium."  Driving to and from her home over the years, she noticed "how the land existed around the highway, changed by mountaintop removal.  I was fascinated by the theater of the land and how we use the land; how the land fights back at what we do to it....  fascinated by the theater of how we experience nature."

She made a series of quilts in which homes were depicted not as house shapes but as mountain shapes.  She showed fanciful machines eating away at mountains, turning them into mud.  In fact, mud became one of her favorite substances and metaphors.  "I think of mud as the most primal substance -- a lot of dead things broken down and merged into a new, vital substance -- much like a quilt."

She cuts small bits of fabric into even smaller bits, stabilizes them with Solvy and sews them together into "fabric mud," a surface that has lost all the characteristics of its component parts.  The mud becomes expanses of color in quilts, or perhaps stands on its own; she made an eight-foot-tall teardrop-shaped construction covered in fabric mud that hangs from the ceiling.  It turned out to be the last quilt she made for several years -- "like a great period at the end of the sentence."

Denise then turned her attention to video.  Again, she was drawn by her fascination with the land, and in particular, with a spill of coal ash from a power plant into a river in eastern Tennessee in 2008.  She filmed the scenes of destruction and seemingly futile attempts to clean up and repair the damage.  As she completed the project, she decided to project the video onto a quilt rather than a plain white screen.

The quilt/movie screen is a large white whole-cloth piece which she embroidered in black thread.  She filmed her hands as she stitched, and at points during the screening you can see her making the designs that are seen on the finished quilt, projected right next to them.  For instance, in this sequence we see her hands, in two different views, stitching the word "FUTURE," which appears on the quilt/screen just above the hands. 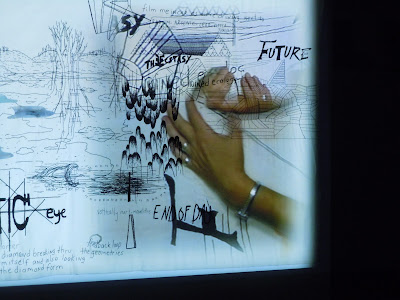 The next day, Denise participated in a panel discussion on contemporary quilts, which I'll write about in another post.
Posted by Kathleen Loomis at 6:23 AM