How not to display quilts -- the sequel

Well, I didn't see that one coming!  Who knew that complaining about quilts draped, wrapped, wadded up and photographed underneath babies would be seen by a bazillion web surfers as an insult to them and to everything we hold dear? 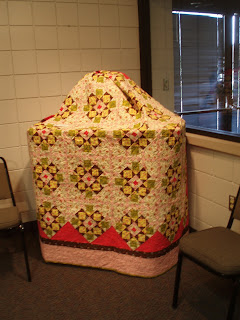 Yesterday I wrote about my unhappiness at going into a museum and finding quilts on display, not on the wall so we could see all of them, but in strange shapes and formats.  And then I commented that the Generation Q blog did a similar thing with a photo of a quilt that I found quite appealing -- or at least I liked the part I could see, even though at least half of it was folded under or draped out of view.

Jacquie Gering, who made the quilt, was unhappy to read my post, and as a result, many of her readers shared their feelings by commenting on it.  I have removed the photo of her quilt from my blog, although I would be happy to have you visit the Generation Q blog and see half of her lovely quilt.

To set the record straight, I'd like to share the emails that Jacquie and I exchanged last night.


What a wonderful crowd of faithful friends you have!

I am sorry that you and they misunderstood my feelings toward your quilt. Actually I liked it a great deal, what I was able to see of it. And I wished I could have seen more of it.

Which I thought was my point -- that the photo did a disservice to your quilt. We rarely see paintings depicted in the media with two-thirds cropped or folded out of view, and probably we wouldn't be much impressed with them if we did see them this way. I think people would be far more inspired if they could see your whole piece.


Thank you for getting in touch with me. This issue for me isn't about anyone liking my quilt, it is using my work without permission. I also didn't appreciate my photo being associated with a post that demeans modern quilting and which states an opinion with such a negative tone. I would appreciate if you would take the picture down. I understand that my readers have not been kind with their comments. I'm sorry for that. That was not my intent. I was hurt and angry when I read your post.

As for an apology, that is up to you.


Jacquie, I will be happy to apologize for some things.


I'm sorry that I did not ask you for permission to use the photo. I took it from the Generation Q blog, using the same rationale of fair use that most critics and reporters avail themselves of.  The concept behind that rationale is that when work has been published, it's kind of fair game for others to comment on. I think this is well within the bounds of both legal and ethical practice, but it would have been better had I asked you.

I'm sorry that you read my post to be demeaning of modern quilting. You probably have not read many of my earlier posts on this subject, in which I discuss, first, my wondering what exactly Modern Quilting is, and then, my conclusion that it's a fine thing. I believe that you and many of your readers took offense at the word "so-called." I used this word not to derogate the movement, but to identify it, as many of my readers in the past have expressed confusion and bemusement as to how, if at all, it's different from what we have been doing for many years.

I'm especially sorry that you took my remarks about your quilt to be negative. I like your quilt, and I think it should give viewers a lot of good ideas. But I think viewers would find it more inspiring if they could see more of it. I'm sure you have your reasons for photographing the quilt this way, but I'm one person who wishes I could have seen the whole thing.

I am not going to apologize for believing, and saying, that I think it's disrespectful to quilts and to the people who make them -- such as yourself -- to display beautiful work in offhand and trivial views. I was mostly upset to see the quilts in a museum draped so haphazardly in piles or wrapped around strangely shaped objects. If quilts are going to be depicted and sold as home décor, then of course the standard can be lower, and if people want to take pictures of their quilts with their babies, of course they're welcome to do so. But I wish that quilts could be regarded more highly, if not everywhere, at least in the circles that I care about. And that's not going to happen if quilters don't give and demand more respect for their work.

kathy
Posted by Kathleen Loomis at 12:57 AM