A few days ago my camera, which I bought in June 2010, flipped its odometer for the third time, and started counting again at 0000.  That means I've taken 20,000 photos in 17 months, actually more like 15 months if you subtract its three vacations in the Nikon service center.

The high mileage testifies to how seriously I have taken to daily photography; I almost always have the camera in my pocket when I leave home, thus allowing me to take advantage of serendipitous photos like this one: 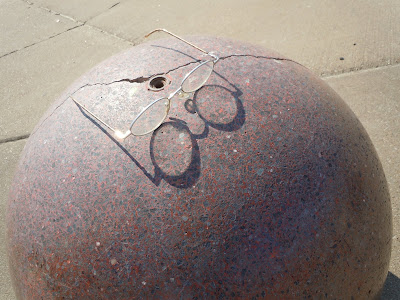 Or this (yes, I know it's bad practice to take pictures while driving, but the light had just changed and we weren't even moving yet...): 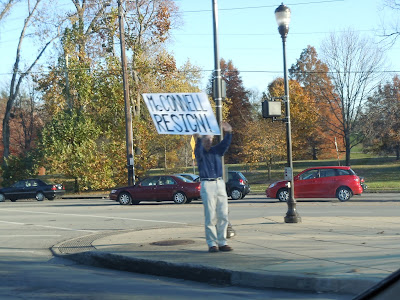 The bad part of flipping the odometer is that now you have three photos named DSCN0032 or whatever.  I've always wondered why Nikon chose to have its naming protocol perform so inefficiently -- fully half of the characters allotted to naming are wasted, while the remaining four don't last all that long for serious photographers.

As a result, my photo folders often have problems.  My food folder, for instance, might have a bunch of Thanksgiving pictures, taken the first time I hit a certain neighborhood in the numbering protocol, interspersed with some of the summer garden from the second time around.  As I go through the folder, I'll come upon a turkey (DSCN3724), then a tomato (DSCN3724 - 2), then another turkey (DSCN3725), then another tomato (DSCN3725 - 2).   I know I could change the names and call them turkey 1 and tomato 1, but I'm getting old and life seems too short.

But if that's the biggest complaint I have about my camera, I'm a happy camper.  At least it's in my pocket these days and not in the Nikon service center.  Hope it holds on for another 10,000 pictures!
Posted by Kathleen Loomis at 6:30 AM