The Halloween Google "doodle" nameplate yesterday featured six half-ton pumpkins carved with the letters of the name.  As a pumpkin aficionada I loved the concept.  As a typographic observer, I noted that only three of the six letters were easily identifiable.  But that's the glory of having a name like Google -- even when people can only make out half of it, they know what the rest is supposed to be. 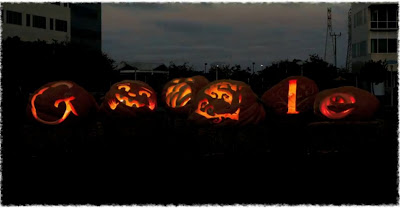