My 12-year-old nephew was visiting from Australia recently and had some requests.  His mother had bought him new T-shirts at an outlet mall but none perfectly fit his fashion sensibilities.  Could his aunt the sewist do something to remedy the situation?

Such a challenge generally sets the adrenalin going and I said I would do my best.  What was the problem?

The first one was easy.  The shirt had a breast pocket and he didn't like it.  Among other things, unruly boys at his school have been known to grab pockets and rip them off.  He'd already been advised that unsewing the pocket would look bad (even if we managed to get the stitches out without leaving holes, a printed logo was half on and half off the pocket).  So he would settle for sewing it shut.  But I went for the much simpler approach, fusing it shut.

The second problem required more artistic contemplation.  The two identical shirts were plain, solid colors, and that just wouldn't do.  He wanted some kind of design.

I went through the possibilities.  Paint, tie-dye, discharge, applique.  To that last one, his mom said, "you know, like the little heart on your father's sweater" that was one result of my big mending project at last year's visit.  But if Dad has it, would a kid want it too?  Of course not.

We tested the fabric and sure enough, both the red and the orange shirts discharged nicely with Finish dishwasher gel.  So we put a nice abstract design on each one. 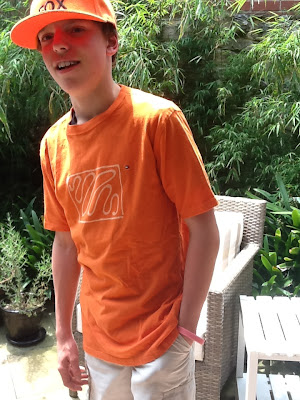 Here's Robbie with one of his new shirts.
Posted by Kathleen Loomis at 6:28 AM