Obituary of the week

Yesterday's New York Times carried an obituary that gave me pleasure, not because a good woman died but because the newspaper celebrated a life worth living, and of interest to fiber artists.  The departed is Mary Hunt Kahlenberg, who was curator of costumes and textiles at the Los Angeles County Museum of Art and later was an important textile collector and curator in Santa Fe.

Perhaps her most notable accomplishment was to organize, in 1972, an exhibit of Navajo blankets that toured widely and greatly impressed the art world.  Rather than showing the blankets as craft artifacts or in dioramas, she put them on the wall, just like paintings.

The NYTimes art critic wrote at the time, "The range is amazing.  There are designs here — fields of gray with the leanest linear embellishments — that answer to the strictest notions of minimal aesthetics, and there are others that are so vivid in their color, so intricate in their accretion of forms, so overpowering in their optical effect, that they make the inevitable comparisons with recent developments in op art almost laughable.  Nothing that our painting has produced in recent years exceeds in sheer visual power the strongest works in this survey.” 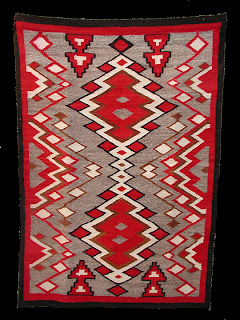 While I had been unaware of this important exhibit, the critical remarks reminded me of a similar blockbuster show at just about the same time, the exhibit of American quilts at the Whitney Museum in 1971.  There, too, the critics raved; quilts displayed on the wall in a museum setting suddenly could be perceived as Real Art (aka painting-like objects).  And of course three decades later came the Gee's Bend blockbuster, where again, quilts on the wall blew the critics away: "some of the most miraculous works of modern art America has produced," the Times wrote.  "Eyes of New Yorkers attuned to modern art will find echoes of painterly equivalents."

Ah, yes, to be Real Art it has to remind us of paintings.  And interestingly, no matter how powerfully the critics were impressed by the textiles, they apparently weren't persuaded to seek out and venerate similar pieces in other venues.  The Real Art world always recovers quickly from blockbuster appearances of non-traditional mediums, at least those executed by artists who didn't get MFAs at Yale or contracts with Gagosian.