Print fabric -- spawn of the devil??

When I wrote last week about the trendy colors in modern quilting and showed an array of prints in said colors, I was surprised at some comments from people who apparently don't like prints in any way, shape or form, whether the colors are trendy or not.  Even though I know that most people who think of their work as art more than as quilts don't use commercial prints, I wasn't expecting the vehemence of the responses.

Although I generally haven't used commercial prints in my own work in more than six years, I don't share that disdain.  I own a truckload of prints in every color and style known to mankind, and have a fond hope that someday I will figure out how to use them.  In other words, don't write and suggest that I could eliminate my problem by sending the truck over to your place or to the Rosebud Sioux Indian Reservation.  I like my prints, just don't know what to do with them at the moment. 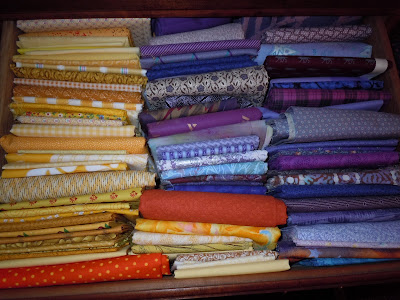 Here are glimpses into some but by no means all of the drawers I have filled with commercial prints.  You can see that I take some care in putting them away -- folding them to be the same height, sorting them by color. 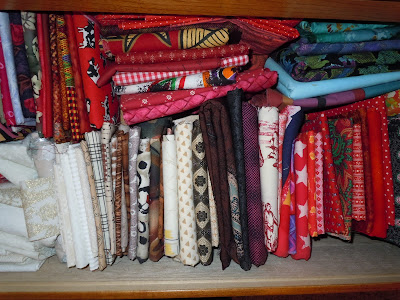 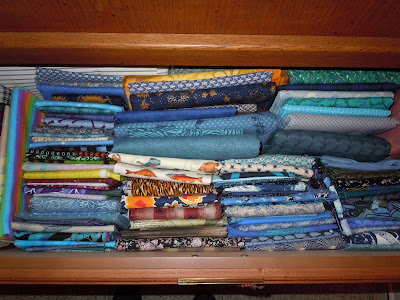 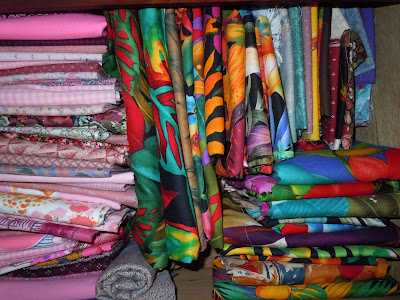 Most of these are quarter- or half-yard cuts, although I have taken pains to save bits after using some of the fabric.

One of my best quilting friends says she loves nothing more than to use up the last piece of a fabric that has been around for a while.  I am exactly the opposite -- I will never use up the last piece unless I absolutely have to.  When I've used almost all of a fabric, I'll fold it into a really tiny little packet and move it to a box reserved for "endangered species."

I will admit that many of my commercial prints look dated and even ugly.  Who knew what caused me to buy them in the first place?  And in some cases, I didn't buy them, I inherited or otherwise acquired them.

It's probably time for me to sort through the drawers and pull out the fabrics that look ugly.  I still own a lot of old-fashioned small calico prints, but they've mostly been pulled out of the drawers and put into a separate place so I can give them to new quilters who want to work with a traditional look.  In general, I still love my prints.  I like visiting them in their drawers, even if they don't get to come out and play very often.  I like straightening them out and arranging them in neat rows so you can see everything there without having to paw through a pile.  I like HAVING them, even if I don't use them.  As vices go, I think you could come up with worse.

Posted by Kathleen Loomis at 6:45 AM