Yesterday I finished quilting on my second major Quilt National entry and have moved on to the next step in finishing: blocking the quilt.  It's too big to fit on a design wall board so I have about three-quarters of it pinned up, and in a day or two will take it down, rotate it and block the rest of the quilt. 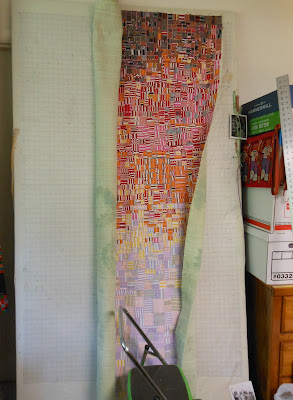 Here it is looking pretty beat up.  It has been rolled and folded the long way for the last week, and the vertical creases are pretty prominent.  I started by pinning the dark edge, which I had previously trimmed to be straight, to the top of my design wall.  Then I pinned the right edge down the side of the board.

After the right side was established, I opened the quilt up to the full width of the board and pinned all four sides.

I put pins every three or four inches, trying to get the quilt as taut as possible.  I sprayed the quilt with water, getting the quilt fairly damp.  Then I went back and redid all the pins, pulling each edge of the quilt a bit farther away from the center and repinning.  The damp fabric stretches a bit more, so that my second pass got all the edges a quarter-inch or so farther out.  I adjusted pins as needed to eliminate bulges and ruffles at the edges, and to stretch out any lumps or ripples in the center. 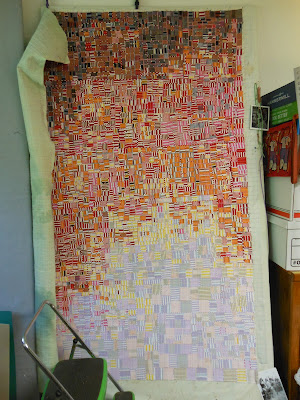 I know that some people like to block their quilts with steam and/or ironing, but I like the low-tech method.  It does stretch the quilt more than you might imagine, and if the top was trimmed straight across before quilting, like the dark edge on top in these pictures, it will probably end up needing to be trimmed again.  But it will be beautifully flat, ready for finishing.