Good news and bad news at the fabric shop

I try to avoid fabric stores, especially the big national chains, unless I really have to.  About the only things I've bought much of in the last few years are solids, and I try to buy staples like thread and batting in bulk, often by mail, so my trips to the store are limited.  Thank heaven -- I hate retail establishments and I hate shopping.

But yesterday I was in need.  I just finished quilting Top #1 for my Quilt National entry, and that used up my last big piece of wide drapery-weight cotton that could be used as backing.  To move on to Top #2, I needed some more fabric for a back.  Armed with a 50% coupon I headed off to the Big Fabric Store. 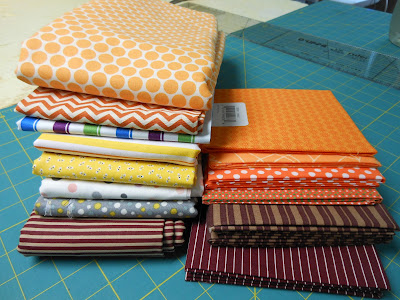 These were browns and dark reds, plus another yard of a yellow-and-red I had gotten a few months ago and used plenty of in my striped quilt, just finished.  I wish I had found these darker stripes three weeks ago when I was making the dark half of Top #2, but at least I'll have them on hand for the next time.

But on to the bad news.  At least I regard it as bad news -- probably the CEO of the Big Fabric Store will break out in smiles when he reads it.

I've watched thousands of yards of fabric being cut during my lifetime, and I have never seen a clerk as ostentatiously stingy as the one who waited on me yesterday.   With each piece of fabric she spent at least 30 seconds lining up the cut edge of the fabric with the line on the left of the yardstick, tugging and pushing the bolt so not a single loose thread protruded beyond.  When she had to cut more than a yard, she fussed and fiddled with her thumbnail to make sure she didn't grab an eighth-inch too much, or place it back on the line an eighth-inch too far.

For one piece of fabric I told her I would take the entire length left on the bolt.  She measured it as one yard, 28 1/2 inches, then converted it with her calculator to 1.792 yards.

One piece of fabric had gotten wrinkled at the cut end, and after she fiddled with it a bit I noticed that she was getting ready to cut two inches off the cut end.  Ordinarily I would probably have watched with curiosity to see what was going on, but I was really getting annoyed by this time.

I asked her why she was going to cut it.  Because it was all wrinkled and this would give her a clean edge to measure from.

Why don't you just cut my yard without trimming off the end?  Because that would cause our inventory to come out wrong.  We have to keep track of the shrinkage.

Were you going to throw the two inches away?  No, it would go into a bin to check against inventory.

Having detected my annoyance, she decided to change course and spent a full minute smoothing out the wrinkled edge and lining it up carefully.  After a great deal of back-and-forth nudging I said, "God forbid you should give me an extra quarter-inch."

Well, she's right.  But the policy seems like a good example of penny-wise, pound-foolish.  For one thing, it takes an awful lot of time to push and pull to prevent giving away that extra quarter-inch.  I had previously spent at least ten minutes leafing through some truly awful scrapbooking magazines while waiting for my turn at the cutting table, while the clerks fussed and fiddled to keep from giving other people an extra quarter-inch.  We all know that the customers' time means nothing to the Big Fabric Store accountants, but how about the clerks' time?  How about the time that somebody was going to have to spend to measure that wrinkled two inches and tote it up for inventory?  And I thought retail shrinkage mostly comes from shoplifting or employee theft, not from inaccurate fabric measurement.

More important, this kind of stingy behavior tends to annoy the customers, already testy from ten minutes worth of awful scrapbooking magazines.  There's a concept in retailing called lagniappe, a little bit of extra product that the vendor gives away for customer goodwill.  Whether it's the chips and salsa at the Mexican restaurant or the cheese sample at the grocery store, this makes people happy and, supposedly, willing to keep that wallet open a little more and/or come back again soon.

For most of the thousands of yards of fabric I've purchased in my life, clerks have been fair in their measurements but on the generous side.  An extra half-inch in the grab, rounding the end of the bolt down to the nearest eighth-yard instead of measuring it to three decimal places.  Did that practice send their stores into bankruptcy?  I don't know, but it sure did bring me back to buy another hundred yards of fabric.  By contrast, I'm really looking forward to not patronizing the Big Fabric Store any time soon.


Posted by Kathleen Loomis at 6:08 AM