When I wrote last week about having bought some fabric at the Big Fabric Store, somebody posted a comment that read, "I am surprised that given your disdain for anything not up to your standards of "art," that you would use sub par fabrics like those you find in that 'Big Fabric Store'....  considering the time and effort I put into my work, I wouldn't consider using low quality fabric." 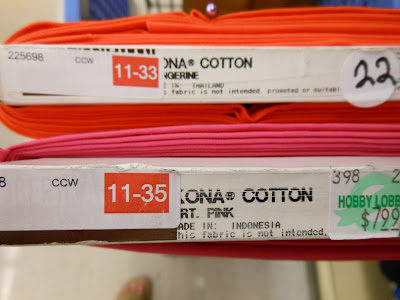 I replied that fabric quality isn't all that important to me, for a couple of reasons.  First, most of my piecing uses  quite tiny bits, which doesn't give bad fabric all that much opportunity to misbehave or look limp and cheesy.  And second, I never wash my fabric, before or after construction, so there's no opportunity for it to bleed or fray.

But the comment got me to thinking about snobbery.  We all are snobbish about certain things, totally laissez-faire about others.

I'm not very snobbish about materials, beyond never using polyester batting.  I'll use the cheapest fabric I can get away with, which means innocent till proven guilty.  (On occasion I've cussed at certain faults of low-end fabric, but high-end fabric has its faults too, including the price tag.)  I love Aurifil thread, but am willing to use Coats & Clark if that's a color I need.  I own a huge supply of a relatively low-end machine embroidery polyester thread, which I use for quilting, because it works better in my machine than a lot of higher-priced specialty threads.

I'm a bit more snobbish about my tools.  I love my Berninas and am spoiled by their performance and features; once took back a lower-price machine, highly recommended by many quilters, after owning it five days and deciding it was just too clunky.  I've never had the urge to see if needles other than Schmetz might work just as well.  I won't touch those cheap, small, dull-from-birth seam rippers.  I have great lighting above my worktable and my machine.  But I buy mid-range irons, content to replace them when they die, and mid-range scissors (I am a snob about having many, many of them so one is always within reach).  And rather than invest in a gorgeous studio, I have a jerry-built operation in which a card table is an essential part of my sewing surface and the design walls are just panels of insulation board propped against the wall.

But where I'm a real snob is about process.  I believe passionately that piecing is far more elegant than fusing, that it's essential to be meticulous about pressing, that a quilt should lie flat on the wall, that the corners of a faced quilt shouldn't be any thicker than the middle.  I believe that when you get stuck on a project you should put it up on the wall and wait for the fabric to speak to you.  I believe that you can and should work on several things at once. I could probably think of many other examples.

Once a big discussion broke out on the Quiltart email list about people who still regard hand quilting as aesthetically and morally superior to machine quilting and whether such traditionalists deserved to die.   My take was that they were wrong about hand quilting but that I could cut them a lot of slack about love of process.

I bet every one of us has our own little process prejudices somewhere deep inside, whether they have to do with quilting, hunting, fishing, cooking or what have you.  We all love to feel superior to somebody else, and process is probably a less harmful criterion for making such judgments than gender, sexual orientation, race, religion or others of the more popular rationales.

What are you snobbish about?  What don't you care about?  I'm sure your mileage will vary.