Today's my birthday so perhaps you will indulge me for a bit as I muse about subjects that don't have much to do with art.  I was intrigued to read in the paper yesterday that scientists have finally found evidence of the Higgs boson particle, which is widely described as the building block of the universe. 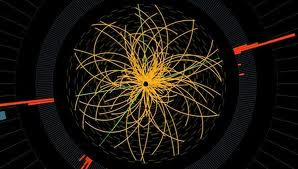 As a kid I was a math and science geek, and was fortunate enough to take advantage of the post-Sputnik enthusiasm for same.  When I was still in high school I got to attend a summer program to take a college course in nuclear physics (loved it!) and it occurs to me that had the road not turned, I could have been one of the scientists working on the search to understand where everything comes from.

But the road did turn, I abandoned nuclear physics after that one course, and soon abandoned math and science entirely, at least for decades.  I've come across my bluebooks from that summer and cannot understand a single word or equation I wrote.  Over the years I have occasionally felt guilty that I don't know much about physics, and tried to read news coverage of the continuing quest to discover the smaller and more exotic particles, but I still don't understand it.  Yet I keep reading -- or more accurately, keep skimming.

Yesterday I came across a wonderful passage in the New York Times coverage:  "The finding affirms a grand view of the universe described by simple and elegant and symmetrical laws -- but one in which everything interesting, like ourselves, results from flaws or breaks in that symmetry."

Now think on that for a bit.  How many of the interesting parts of our lives come from the turn in the road, the magic moments when the symmetry broke -- the stranger across a crowded room, the great teacher who inspired us to go in a different direction.  Or equally, the black magic moments -- the diagnosis, the tornado.

And bringing it back to art after all, isn't art often about the breaks in symmetry?  For instance, the traditional quilt, so symmetrical, so perfect, so boring.  And then one day somebody thought she might change a little bit in the corner, put in a pink patch where a red one "belonged," and it started being art.