Changing the bobbin in midstream

For the last month all I've been doing in the studio is quilting.  Can't count how many spools of thread I've gone through and how many bobbins I've wound, but I can tell you with absolute certainty that it's a drag to run out of bobbin thread somewhere in the center of the quilt.  But I have figured out a routine that minimizes the angst. 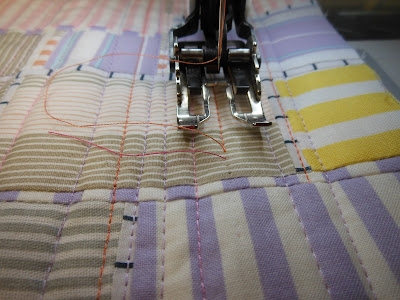 Put a new bobbin in.  Now grab the loop of top thread and stick your finger into the loop so the takeup mechanism won't pull it taut. 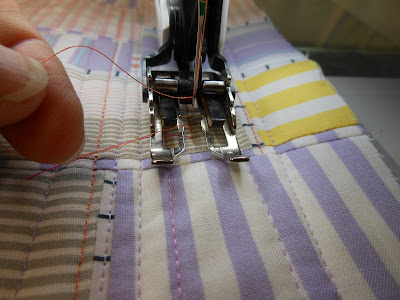 Position the needle exactly at the last stitch.  Rotate the wheel manually one turn so the needle goes down and grabs the end of the new bobbin thread and comes back up again.  Pull on the top thread (still wrapped around your finger) until the bobbin thread peeks up above the quilt surface. 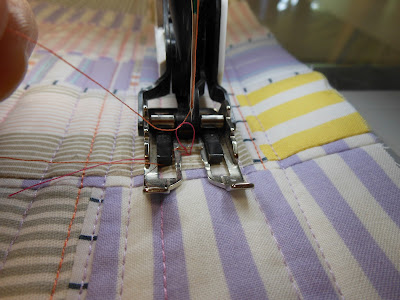 Snag the loop with a needle, tweezer, seam ripper or other tool and pull until the end of the thread comes up. 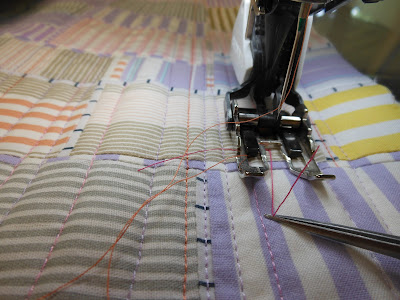 Pull the thread end over to the side, along with the thread end from the old bobbin and hold them both firmly with your finger so they won't escape.  With your other hand, grab the top thread on top of the sewing machine, somewhere between the spool and the tension plates, and pull it backwards so the thread is taut between the quilt and the needle. 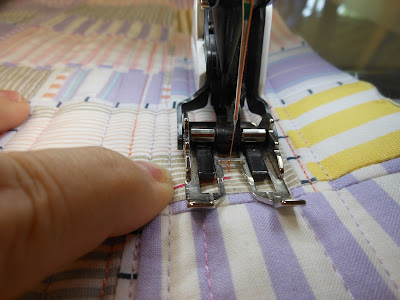 Lower the presser foot so the needle is exactly in place to continue the stitch line.  Holding the thread ends taut with your finger, start stitching again. 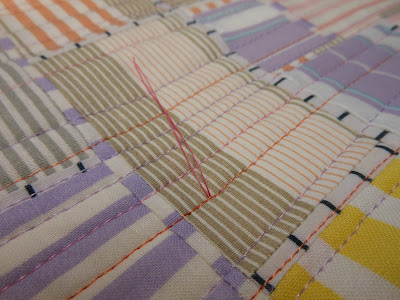 The quilting line will look perfect, because the top thread is uninterrupted.  Later, go back and sink the thread ends.  If you don't know how to sink thread ends, check out this tutorial.