All the El Anatsui works I showed you in previous posts were hung against the wall, even though many of them bulge and drape into a third dimension.  In fact, some were suspended quite a ways out on various hooks and supports. 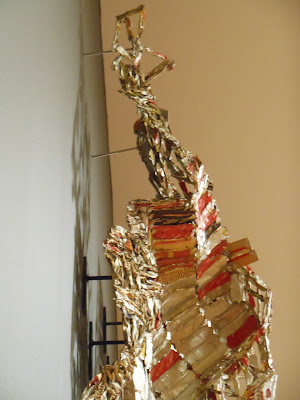 
But some were adamantly 3-D all the way.

Here's a whole room full, one work with three separate panels that you can walk around.  The whole work is titled "Gli," which can mean wall, disrupt or story.  Anatsui has said, "I think that walls are human constructs that are meant to block views, but they block only the view of the eye -- the retinal view -- not the imaginative view.  When the eye scans a certain barrier, the imagination tends to go beyond that barrier, so in that sense, walls reveal more things than they hide."

The curators apparently had fun hanging this piece.  One of the panels is irregular and curvy, and turns a corner at one end.  It's hung with a knee-high open space at the bottom. 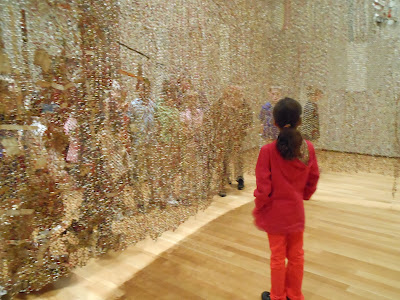 Another is dead straight, dividing the room on the diagonal and stopping smack at the floor. 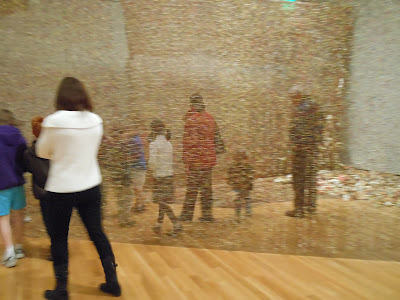 Behind it, the third panel is hung against the wall but spills out onto the floor.

The adjoining room is full of huge shopping-bag sculptures, made out of the aluminum plates used to print newspapers, advertising flyers and other ephemera. 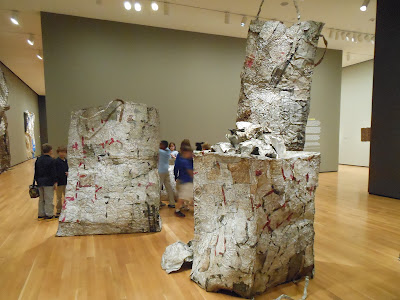 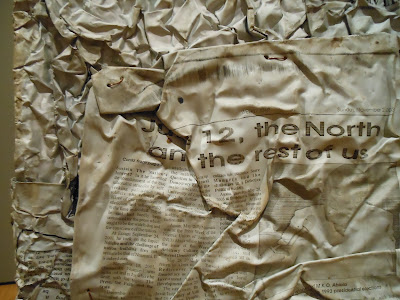 Finally, here is just part of an installation made of the rusting lids of milk cans.  All of the parts are made of lids wired together into flat sheets, as with his larger wall pieces, but the lids are big enough that they will support each other when pulled up into peaks.  (There's a double-entendre: Peak is also the brand name of the milk.)  Other parts were displayed lying relatively flat on the floor. 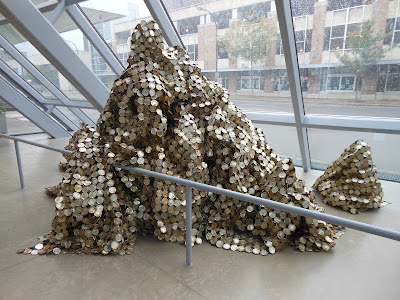 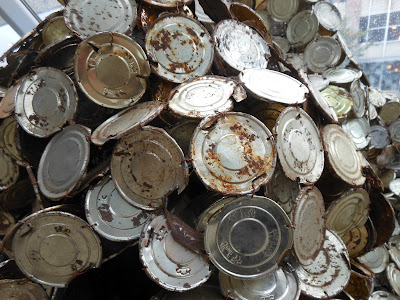 Stay tuned -- in a later post I'll show you several of Anatsui's early works in wood.