I wrote a couple of weeks ago about a collaborative project I have been doing with Rosemary Claus-Gray. We each started a foot-square hand-stitched embroidery that had something to do with a map, then after working on it a while, we exchanged pieces and each worked on the other's piece for a while.  Finally the pieces went back to their original artists for final touches.

I have now finished my work on Rosemary's piece and sent it back to her.

The two pieces were quite different in character.  Where mine was done on cotton (some hand-dyed pieces that I had done with stitched shibori resist) hers was on a piece of old kimono silk.  Where mine was light, hers was dark.  Where mine had a map-like grid -- indeed, it was a literal map -- hers was a more fanciful depiction.

Many of the stitches in this piece were done to follow or echo the floral print of the silk.  Rosemary made a lot of impossibly tiny stitches to outline the little flowers, but also used heavier hand-dyed perle cotton in places. 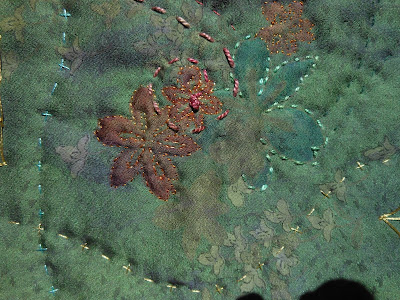 I added lots of running stitches, a bunch of french knots, and some shapes that seemed to me like buildings or rectangular fields. 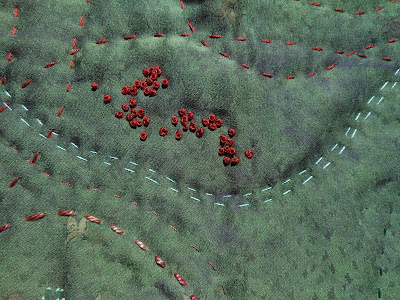 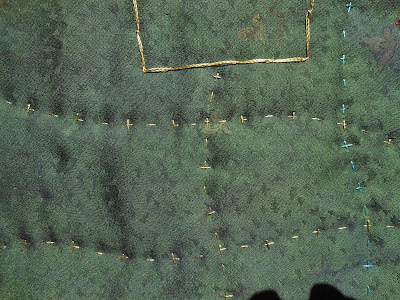 I wasn't sure exactly what was going on in this map while I stitched.  I felt the movement didn't have much of a pattern, so I followed alongside whatever Rosemary was mapping and figured I'd get there with her.  Toward the end I decided it needed some straight lines and put in what I thought were fields or structures. 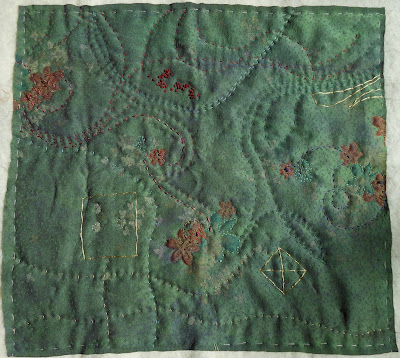 Here's the piece that I sent back to Rosemary; tomorrow I'll tell you what the map was about and how she finished it.