I've told you about my two quilts that were rejected from the SAQA Text Messages show; now here's the good news.  The third one was accepted.

I wrote about it last fall when I started working on it.  The SAQA people have asked us not to show full view photos of the accepted quilts until the show goes public in Houston next fall, so I'll just give you a peek at the detail shot. 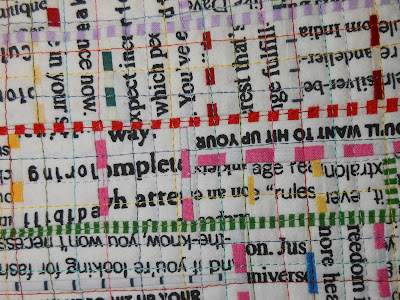 As you can see by the title, this is the 20th quilt in the series, all made with tiny bits of fabric separated by fine pieced lines.  I was wondering last summer whether this series had run its course, whether I could think of something new to do with the same idea and whether I even wanted to go back to the same well again.

This quilt convinced me that I did -- and I got enough energy out of making this piece that I think I'll make at least a couple more before moving on.  I started this series in 2007 and the following year I thought maybe I had done all I could with the concept.  Since then I have been continually surprised and pleased at how the muse keeps coming back, even when I think she has deserted me.  Obviously she just needs a little vacation every now and then.

Posted by Kathleen Loomis at 6:47 AM