Just when you think you have made a resolution, something comes along to make sure you don't keep it. Perhaps it's a bag of Cheetos that arrive from the grocery by themselves, when you were trying to avoid junk food.  Or my story for today, perhaps it's a call for entries from SAQA for a show that you can't possible pass up.

I was kind of down on piecing last fall after my summer-long marathon of getting three huge quilts ready to enter in Quilt National, only to have them all rejected.  I wanted to work on something different, maybe collage or calligraphy.  I enrolled in an art history class.  I committed to a whole new body of work, not in fiber, for a show.  I could happily envision a long time away from the sewing machine.

Then SAQA called to me.  They announced a new traveling show called "Text Messages," in which you had to have at least one letter or word on the quilt.  I have loved words and letters all my life and have used them in my art many times in the past, and I found it effortless to crank out three quite different quilts to enter in this show.

Here's one that got rejected, and its long story.

Several years ago I was working on a series of quilts about the war in Iraq.  In addition to the death and destruction of actual combat, I was concerned about threats to our personal liberties at home, thanks to the absurdities of security theater at the airport and widespread wiretapping of phone and electronic communication by citizens.  I wondered whether the wiretapping would actually accomplish much, whether the fragments of overheard messages could ever make sense.

I started a quilt that was going to be entirely covered in appliqued messages.  Many of them were cut from selvages, always a good source of words.  Many came from fabric that included writing; I've been collecting this stuff for years.  And many I just printed out or wrote with Pigma pens onto fabric.  I finished perhaps a third of the piece and for some reason got distracted, folded it up and put it away. The box was well-labeled and every month or so I would come upon it and think that I really should get it down and finish it some day. 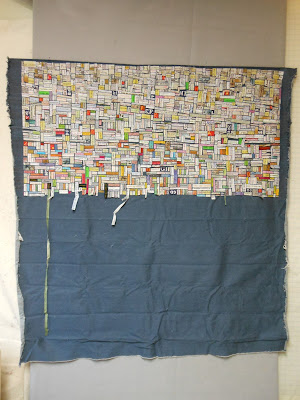 But it wasn't until SAQA's call for entries that I opened the box -- and to my immense surprise, found that the finished part of the quilt was 23 1/2 inches long.  The SAQA quilts had to be 24 inches wide, by whatever height we wanted.  So by flipping the quilt 90 degrees, slicing off the unfinished expanse of denim, and adding a half-inch worth of additional words, I was almost finished!! 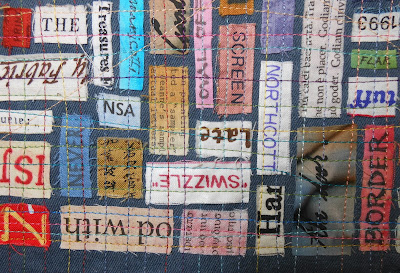 A whole lot of additional sewing over the top of the piece, holding down the pieces in a dense net of stitching, and it was done. 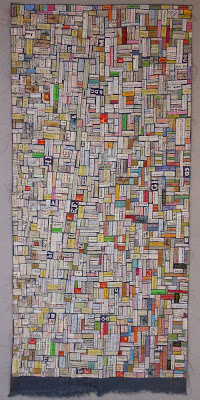 
Too bad the juror didn't like it enough to accept it for the Text Messages show.  It will get out in public somewhere, someday.