Light at the end of the tunnel


My father wrote more than 30 books in his lifetime, many of which I helped with when I still lived at home.  In those pre-computer days every book had to be typed at least twice (not counting the author actually writing it) and that job went either to me or my mother.  It also had to be proofread (my specialty; I tried to do that job even after I moved away).  At the very end came indexing: a two-person job at first as Dad called out the items and I wrote down the page numbers, then it reverted to me to compile and alphabetize the results.

As a result, I know a bit about the pressures of getting a book actually finished.  It often seems as though the last 2 percent takes as long as the first 98.  But the book I'm laboring to finish right now is unlike anything Dad and I ever tackled.

Because this one needs pictures.  Sure, Dad's books had pictures, but they were acquired the old-fashioned way, by finding an image somewhere and having the publisher get permission to reproduce it.  Mine are acquired the hard way, by sewing a quilt and taking photos of every step.  And this is REALLY the hard way, because I take my own photos, and taking a decent instructional photo of yourself sewing is tricky.  Among other things, you can only have one hand in the picture! 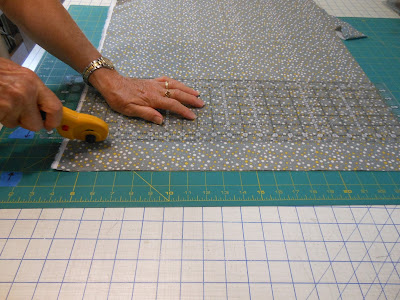 My friend Marti served as hand model for this tutorial on rotary cutting.

I thought I was pretty much done a month ago when I sent off a reorganized draft.  I had given lots of info about almost every phase of piecing a quilt top: how to cut, how to sew, how to press, how to join the blocks.  Also material on finishing your quilt: blocking, squaring up, trimming, applying a binding or facing, making and attaching a sleeve.

Notice anything missing there?  Right, nothing on quilting.  I had fervently hoped to not discuss this subject; after all, it's supposed to be a book on making quilts without using somebody else's patterns.  At the first, I hadn't expected to make this a technique book at all, just focus on design.  But the few helpful hints I threw in seemed to take on lives of their own, expanding into fullblown instructions.

Damn, guess I have to write about quilting after all, to make the story complete.  I have plenty of photo tutorials in the bag about straight-line quilting with a walking foot, but nothing about free-motion.  So here I am doing one last quilt (I hope!!) to illustrate all the steps of sandwiching, quilting and trimming. 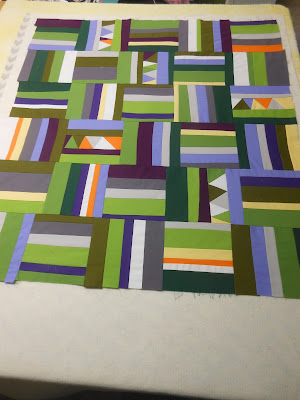 Am I almost finished?????  I really hope that light at the end of the tunnel isn't a train.


Update:  I'm linking this to Nina-Marie's blog; visit her to see what other fiber artists have been doing this week.

Posted by Kathleen Loomis at 7:57 AM