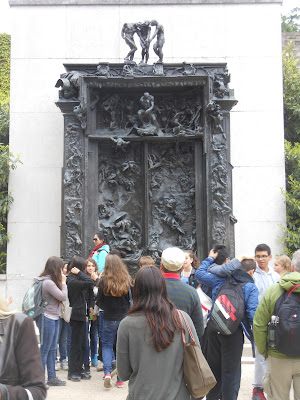 Although Rodin never installed his massive Gates of Hell doors at the museum that commissioned them, the project was a fertile ground for many other sculptures (the Gates themselves showed up in several places, just not where they were originally intended).  Most famous is The Thinker, but other bits also stepped out and became free-standing pieces. 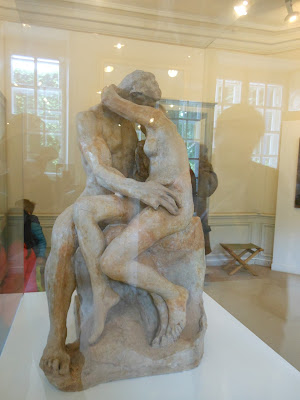 This one, representing Paolo and Francesca, doomed lovers from Dante's Inferno, appeared in early maquettes of the Gates.  Rodin decided they were too happy for their surroundings, and took them out of the final version.  But never one to waste a good concept, he rendered them in terra cotta here and eventually in a larger marble version. 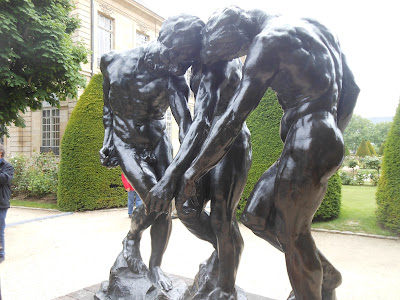 My favorite spinoff is The Three Shades, who stand at the very top of the Gates, pointing to the ominous words "abandon hope, all ye who enter here."  They're actually identical triplets, each one cast from the same mold, but turned so that they each seem different.  The telltale of identical casting is to look for some distinctive mark or blob (perhaps deliberate, perhaps a trace of the casting process) and see if it's replicated.  Here I noticed a big welt on the back of the left calf, the same on all three guys. 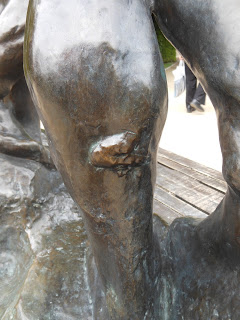 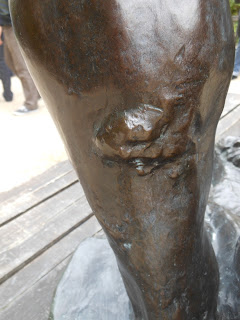 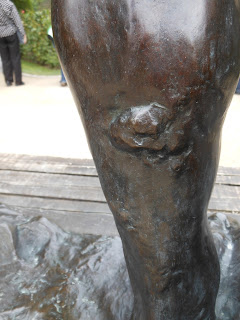 Since learning more about Rodin's many multiples, I've been thinking a lot about the nature of bronze-cast sculpture, where the artist isn't closely involved in the actual making of the work.  He may hover about the foundry (or in Rodin's case, send helpers to check on the casting) but it's not his hand any more at the end of the process.  Did it make the sculptor nervous to turn over his baby to somebody else to finish?  Was it exhilarating to order up dozens of Thinkers to populate the world?  (Just like The Boys from Brazil.)  Why do I lose respect for some artists who outsource the making of their work to others, but not for Rodin?