My art history teacher last spring, Chris Fulton, is an authority on Rodin's great statue "The Thinker," which came about by accident.  When Chris arrived at the University of Louisville a dozen years ago he noticed that the bronze Thinker who sits on the quad at U of L was much the worse for weather, its patina severely damaged and deteriorating before our eyes.  He started to pester the administration to do something about it -- our Thinker, the first bronze casting ever made in that size, is priceless.  (There are about 28 full-size Thinkers around the world.) 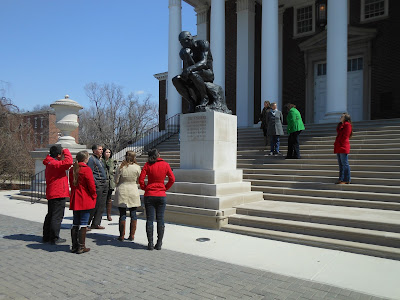 Auguste Rodin, The Thinker, at University of Louisville, surrounded by Chris Fulton and his art history students

After years of pestering he got them to commit to restoration of the Thinker, but as reward for his good intentions, he got put on the committee.  The job was finally completed a year ago, and in the course of his work with the restoration, Chris became quite the expert.  He also has begun working with some of the people he met on a larger project to document and study all the Thinkers ever cast.

Hearing him tell about his adventures in Rodin made me especially eager to hit the Musée Rodin when we got to Paris.  The building used to be Rodin's studio/workshop, and he donated all his sculptures to the government upon his death on condition that they turn the place into a museum.

Rodin first did The Thinker in 1880 as part of a commission to sculpt two massive front doors for a museum in Paris.  The doors depicted the Gates of Hell, a scene from Dante's Inferno, and Dante himself sat above the lintel contemplating the folly of mankind. 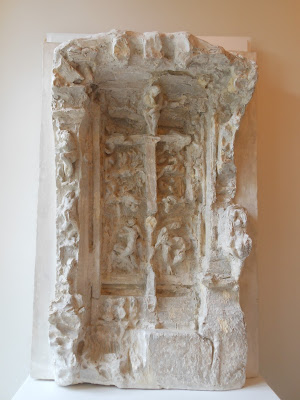 The museum was never built, and Rodin kept working on the doors until his death, but it was hardly a failed project! 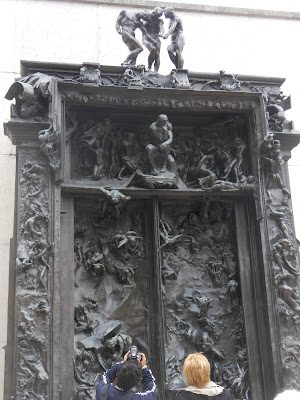 
The huge production spawned many figures and poses that were given their own spinoff series, so to speak.  The Thinker was first made as a free-standing statue in 1888, the same size as in the doors (about 28 inches tall). 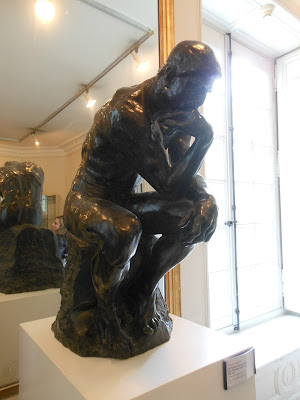 
It was so popular that Rodin scaled it up to monumental size, about three times as big.  Multiple casts were made in both versions, and one of the big guys is in the garden of the Musée Rodin, thinking under the golden dome of the Invalides. 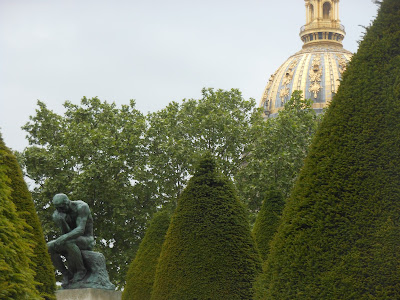 
Posted by Kathleen Loomis at 6:30 AM