All the news that's unfit to print 1


As a former newspaper journalist, I really get annoyed when newspapers print stupid, worthless things to help the American public become even more ignorant.  So I've decided to start calling them out in public.

Even worse than printing stupid, worthless stuff is printing stuff that is downright wrong.  For instance, in yesterday's paper: 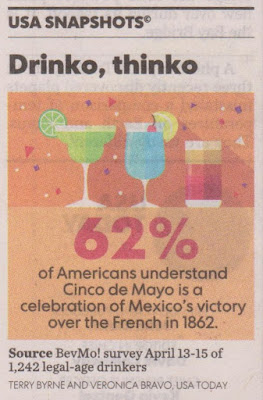 In an age when only 65 percent of the American public can name even one of the three branches of our government, and 10 percent think that Judge Judy serves on the Supreme Court, do we really believe that 62 percent understand (does that mean "know"?) what Cinco de Mayo celebrates?

Well, maybe if the question was posed this way 62 percent could answer correctly:

What does Cinco de Mayo celebrate?

C.  The signing of the U.S. Declaration of Independence in 1776.

D.  The first meeting of the parliament of Iceland in 930.

(And how interesting that they chose to illustrate a historical holiday with pictures of drinks.)

Posted by Kathleen Loomis at 8:28 AM