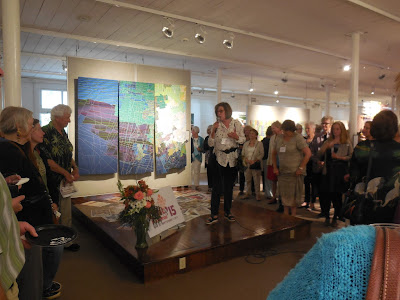 In the last couple of days the rules for Quilt National '17 have appeared on their website, and I checked to see what if anything had changed since last time around.

First, the good news: the ban on any kind of color correction or other photo enhancement has disappeared.  Personally I never thought about this rule, since I didn't know how to do photo enhancement until quite recently and my regular photographer, George Plager, does such a good job that the photos always look like the quilts.  But some of my friends who are serious photo wonks will be happy to see this rule change.

And I think the notorious virginity rule has been greatly modified!  You may recall that in past QNs it has been verboten for a quilt to have appeared anywhere on the internet except for the artist's own website (or presumably, blog).  That means if you put your quilt on Facebook or Pinterest, or if somebody grabbed the image from your website and posted it on their own blog or site, it couldn't be in QN.  As a result, serious quilters have become paranoid about showing photos of anything they thought might possibly turn into a QN entry.

But a close reading of the new rules finds no mention of the internet!!  They still require print and show virginity -- no appearance in "an American publication that has national or international distribution; this restriction includes SAQA publications" or in "an International or American fiber arts exhibition" before the QN opening next May.  If I'm reading it right, I think this is an excellent change, getting rid of an overly strict and punitive rule.

Now the bad news: first, the deadline is earlier than it has been in the past -- September 1 compared to mid-September in all the years I recall.  I know QN needs a long lead time because of its practice of re-photographing all the quilts for its beautiful catalog, but this change doesn't affect the lead time; the notification will occur on October 6, compared to October 7 last time around.  All it does is give the jurors two more weeks to do their work.

Next, the age limit on entries has apparently been cut in half (full disclosure: I don't have a copy of previous years' rules to compare with the new ones, but I have spent enough time angsting over QN entries that I'm pretty sure I remember correctly).  Quilts must have been finished since September 1, 2015 -- in other words, less than one year old.  If I'm not mistaken, it always used to be two years.

So if you got cracking immediately after the entry deadline for the last QN, and made a great quilt last spring or summer, it's not eligible for this QN.  Which seems kind of silly -- it wasn't eligible for the last QN, and not eligible for this one either?  Strikes me that this rule will only encourage people to fib about when they finished their quilts.  (One reason why I never sew the sleeves on quilts until they're on their way to a show -- I can testify honestly in court that I just finished the quilt last week!!)  I think that in the eternal quest for NEW WORK they've gone too far with this rule.

But get this -- this year it's "entry fee of $45.00 plus a $10.00 processing fee."  Why this elaborate description?  Do they think we won't notice the extra ten bucks?  Is it so they can testify in court that the entry fee didn't go up?  Be honest, folks -- I don't think we'll begrudge you the money, but I do begrudge the obfuscation.


Posted by Kathleen Loomis at 5:31 AM