Any time you make a big quilt there's a lot of repetitive motion involved, but it's interesting how much variation there is in the pattern of work.  Some quilts involve a lot of design and thinking, with considerable design wall time breaking up your actual sewing.  Others have repeating rhythms of sew and wrestle -- for instance, when you're quilting parallel lines all the way across a big piece.  It may take three minutes to stitch a line, then a minute or more to clip the threads and manhandle the quilt back into position for the next line.  Still others have the sewing interrupted by pressing or trimming.

I suspect that all these work patterns are better for your body than the quilt involving hours and hours of pure sewing, where your machine gets overheated and your mind and body get totally overloaded.

I'm working on a piece like that right now.  It's a second flag quilt, in which the red stripes aren't made of red fabric, but of dense red quilting on a white background.  The lines of stitching are about 1/8 inch apart, and the stripes are 5 inches wide by 98 inches long, so that's a lot of sewing. 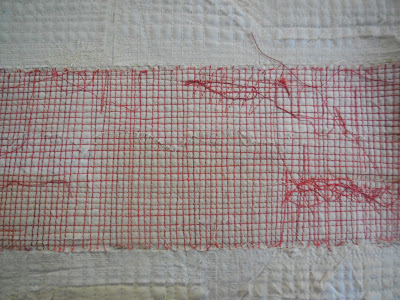 Once a panel has been set up for sewing, with its sandwich made and the right color thread on the machine, I JUST have to sit there for a couple of hours and sew.  It's easy work, because the panels are small, so no need to wrestle with them. And the stitching is almost continuous, because you just turn the panel around when you get to the edge and head right back in the opposite direction.

The last time I had a project like this, with hours and hours of unmitigated machine stitching, I discovered to my surprise and dismay that my right knee was in pain -- who knew that just working the pedal of a sewing machine could damage your body?  I had to finish my Quilt National piece with the left foot on the pedal, and who knew that it would be so difficult to do that?  Almost as hard as writing with your wrong hand.

But over the weekend I encountered a new symptom of sewing machine overload.  I use a knee lever to lift the presser foot, and when it's not in use, the lever hangs down very close to your right calf.  The other night in my third or fourth hour of sewing I became unpleasantly aware of that lever grazing my calf while I was stitching.  I tried to shift my foot pedal or my chair or my leg to pull away, but couldn't find a way to avoid the lever.  It wasn't a painful pressure, not even a firm presence, just a constant little nudge there against me, and I started getting vaguely hysterical, as though imaginary ants were crawling all over my skin.  I've told you before that I am like the Princess and the Pea, overly sensitive to minuscule physical irritations, and this one was really getting to me.

I finally took the lever out and sewed with lots of empty space to the right of me.  But I was quickly reminded why I love the knee lever: it takes more time and motion to turn your sewing when you have to raise the presser foot by hand.  I soldiered on for another hour or so doing it the old-fashioned way, then gave up.  (I know this is a first-world problem, but still...)

Fortunately when I returned to the machine the next day and put the lever back for a test run, it didn't bother me any more.  In fact, I could comfortably sit without it touching me at all unless it was in use.  Why hadn't I need able to find that position the night before?

I have many, many hours of sewing ahead of me on this quilt, and then there's a third one to come.  I guess I'll have to be vigilant about pacing myself on the machine so I don't end up the summer as an invalid, either mental or physical.  Meanwhile, I have four stripes finished and sewed together, and well on my way to the fifth one, so I guess I'm about 35% done.  It's coming along! 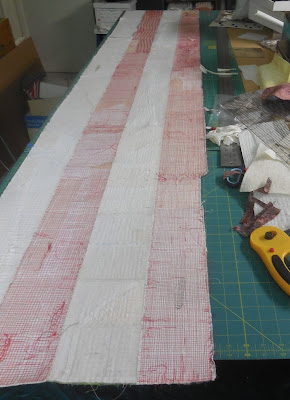