Two of my favorite quilts from AQE are similar in three ways: first, they're somewhat representational in nature (although not realistic); second, they're made mostly in raw-edge applique; and third, they're by artists whose work I have been following and loving for a while. 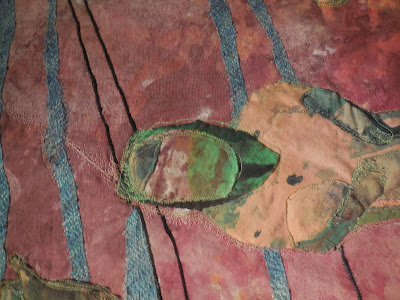 I first saw Sargeant's work in Quilt National many years ago, back when I was pretty hung up on fine craftsmanship and meticulous piecing, and remember that I was amazed and impressed by the power of her loose, painterly style.  I wasn't sure what was going on in the picture except that it seemed to be guys floating around in spacesuits, and it was magical.  She's not a regular on the quilt show circuit, at least the shows that I keep track of, but her work shows up occasionally and is always wonderful.

This quilt, the largest in the show at 58 x 128", suffered from patchy lighting, but nevertheless has great presence, with mysterious figures of humans and dogs emerging from pink and blue clouds. Some of the imagery is painted; some is appliqued.  In places the stitching is dense; in others it's sparse.  I wanted to spend more time reading this piece and admiring Sargeant's vision. 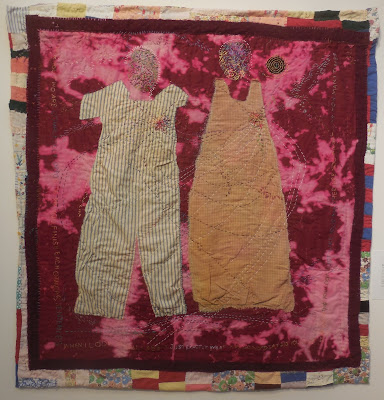 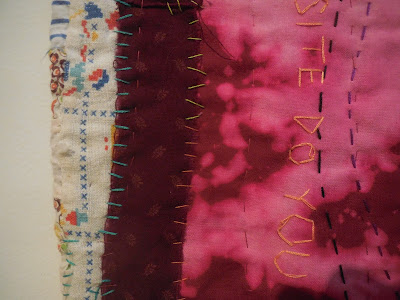 You might think that the conceit of using clothing shapes to represent people would be too cute by half, but McCown somehow imbues her dresses (and in this quilt, coveralls too) with some seriousness.  Hand stitching makes the stylized heads of the twins and a web of lines emanating from one's heart, and records many of the comments that twins have undoubtedly heard thousands of times: "do you finish each other's sentences?" "are you two twins?"  The outer border of vintage patchwork (or perhaps it just looks like vintage) adds a nice down-home touch.