Only one of the 20 quilts in Form, Not Function had a realistic representational image. That might be surprising in itself, because realism is such a standby in quilt/art shows, but I've already commented on the fact that this year's jurors voted strongly for abstraction and piecing.  What I liked about this quilt was not just that its image was striking and well-executed, but that its method was something rarely seen. 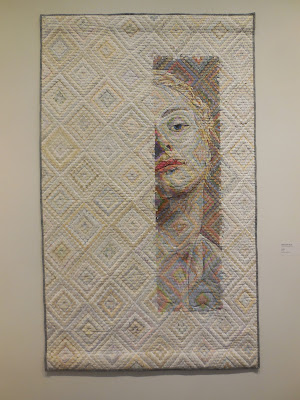 Yes, this is a pieced quilt, made entirely out of half-inch squares.  And you can see in the detail shot that some of the half-inch squares are themselves pieced to give smooth edges to the shapes of the image -- a lot of piecing going on here! 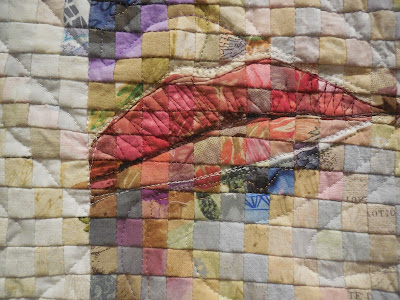 Also notable, from the design standpoint, is how she has superimposed the traditional sunshine and shadow quilt pattern of concentric squares on point over the realistic image.  It takes careful consideration of color and value to achieve this effect while keeping the representational quality of the original image.  Good work!