All the news that's unfit to print 2


In my continuing war against stupid, worthless, ridiculous factoids in the newspaper, this latest piece of evidence: 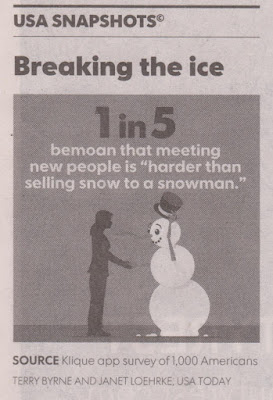 Do we really believe that 20% of the American public thinks that meeting new people is "harder than selling snow to a snowman"?  Maybe, if the question was phrased something like this:

I think meeting new people is harder than:

C.  selling snow to a snowman

E.   putting toothpaste back in the tube

You'd probably get about 20% response for each of the options.

I might mention that the sponsor of this "survey" is an app that lets you "get to know new people without the awkwardness of one-on-one meetups."  Well, at least that ought to cut down on date rape.

Posted by Kathleen Loomis at 5:43 AM