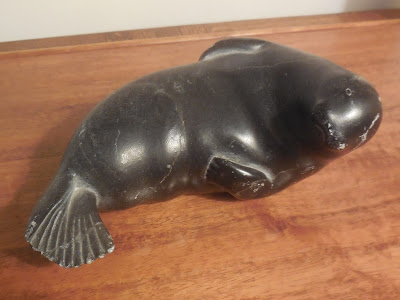 Starting in the late 1950s my father went to Canada frequently on business, and he liked to bring home souvenirs.  Not tacky refrigerator magnets, but Inuit soapstone sculptures, an art form that he discovered early on.

At the time I thought this was a traditional folk art, but have learned more recently that the first peoples hardly ever carved in stone until 1949.  At that time the Canadian government decided to encourage the production of artwork among natives who no longer followed the old subsistence lifestyle.  While they had traditionally carved ivory, bone and antlers, now they were steered toward soapstone, which was found in the Arctic.  (Interestingly, some of the Inuit artists are importing their soapstone from Brazil.) 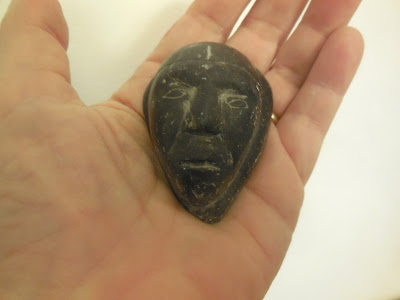 Dad bought sculptures of varying sizes, the largest being about the size of a shoebox, but mostly little things that would happily sit in your palm. Three of the pieces that I was given at the time or subsequently inherited are faces or masks, but most are animals of one sort or another. 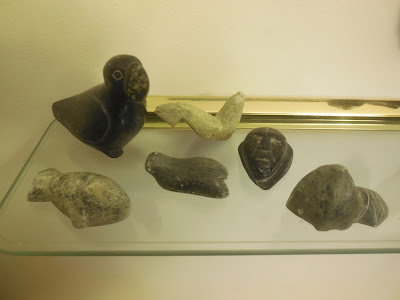 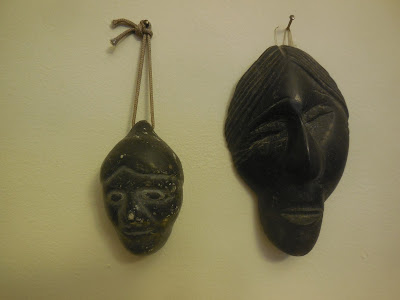 Carvings done before 1990 are now called "vintage," so I guess my little trove might even be valuable if I ever needed to part with it.  Meanwhile, they live on a little glass shelf within reach of my place at the dining room table.  Isaac likes to rearrange and play with them and I like to think of them keeping me company while I sit and eat or read.