"Form, Not Function: Quilt Art at the Carnegie" opened last night, and I'll be writing several posts about it.  It's maybe the best show in FNF's 13-year history, with not a single weak sister in the room.  I'm glad I only had to choose one award, and didn't have the responsibility of deciding on best in show!

Every year I give an award for political and social commentary at FNF.  Last year there were no quilts there thinking about politics and we reluctantly decided to make no award, but this year there were plenty of candidates.  I chose this piece because it's timely, its imagery is striking, and there's certainly no doubt where the maker stands. 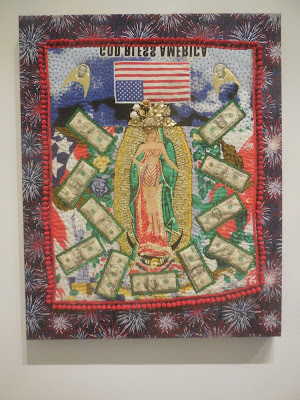 Jennifer Reis, Portrait of a Young Man: Trump in Drag (details below)

There's a lot going on in a relatively small space: presidents both off and on large bills, a Carmen-Miranda headdress of costume jewelry, little pompoms as an inner border, a flag, a motto, and a bazillion sequins and beads, all hand-stitched.  Impeccably crafted and presented on a stretched foundation. 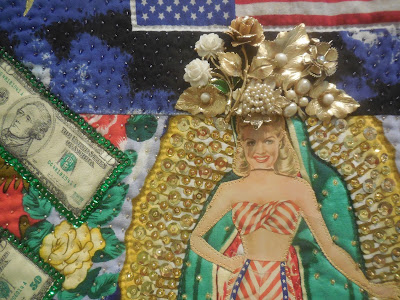 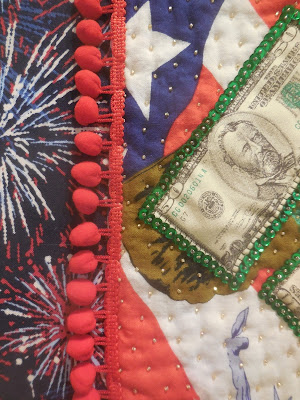 I liked it a lot!

The show will be open at the Carnegie Center for Art and History in New Albany IN through September 16.  Well worth a detour, although the museum is only five blocks off I-64.
Posted by Kathleen Loomis at 1:33 AM