A couple of years ago when I was teaching at the Crow Barn I brought home three grocery bags full of other people's fabric discards.  Because I was teaching fine line piecing, and Nancy Crow was teaching strip piecing upstairs, there were lots of leftover strips donated to my recycling art.  I've been working with these strips ever since, sorting out and sewing together those that match into little compositions.

By now I'm really down to the dregs, a half bag full of the very last of the scraps. 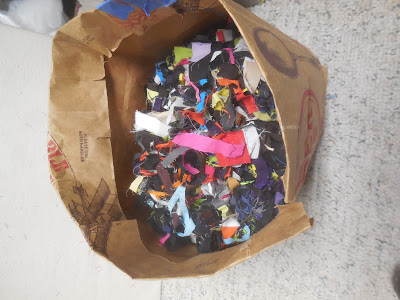 But there's still some use in them.  The six-year-old roots through the bag when he sews.  Last week he found a couple of bits of strip piecing that became the centerpiece of a hanging he made for his mother. 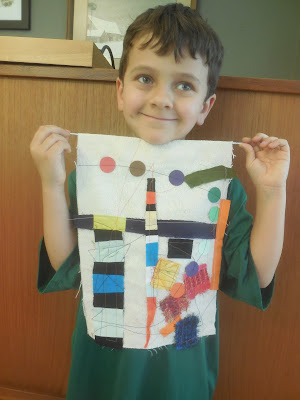 He added some sew-off squares and some paper circles that were left from one of my projects in which I made holes in cards.

One of the things that I love about sewing with children is that they make you think twice about what can't or shouldn't be done.  I had pulled out a couple of sew-off squares and set them by the machine, thinking that he might want to sew off the edge.  He decided to sew them into the composition instead.  My first thought was oh no, those aren't for your hanging, they're for sewing off the edge.  Fortunately, I held my tongue.

Similarly, my first response, when he asked whether he could use the paper circles, was no -- I had just put in a brand new needle after a couple of days of sewing on paper.  But quickly enough I thought why not, and replaced the new needle with the old dull one, which had conveniently been set aside, pinned into a piece of paper to signify its low caste. 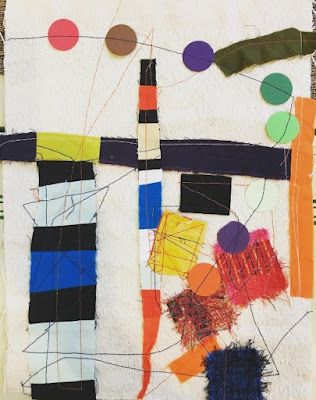 The sew-offs and the circles do enliven the work a lot, even though I probably wouldn't have thought to use them if I had been the artist.  Maybe the moral of this story is to pretend you're working with a six-year-old even when you're just working with yourself.  When your first reaction is no, I can't do that, stop for a minute and say why not?