My parents were great travelers in their later years, just as happy on a cargo ship as on an ocean liner or driving across the Canadian plains.  But as they hit the high 80s they realized that their usual intrepid travel M.O was getting more difficult.  So Ken and I decided to help them out with one last hurrah.  The four of us went to Norway in 1999 to take the famous Hurtigruten cruise, originally the route of the mail boats that carried mail, cargo and passengers along the coast, serving communities that might not have road connections to the rest of the country.

Today the ships still leave Bergen every afternoon, headed for Kirkenes at the Russian border, and take 13 days on the round trip, stopping at 26 ports along the way.  In the big town of Trondheim the stop is six hours; in some of the tiny places it might be ten minutes, perhaps in the middle of the night.  The ships still carry cargo -- our favorite was the one-meter-cubes of salted cod, shrinkwrapped on pallets and left on the dock to be loaded on the next vessel -- but there are as many tourists as locals on the voyage.

Ken and I humped the baggage -- eight big bags among the four of us -- on and off planes, trains, buses, cabs and ships, while Mom and Dad enjoyed the trip.  It was their last big expedition.

I bought only one souvenir on the trip: a reindeer horn which I bought at an outdoor market at one of the towns in Lapland.  Others in my family didn't think much of this purchase, unwieldy to pack in a suitcase, and besides, what did I need with a reindeer horn?  They were right on both counts, but it called to me.  Not only was it unwieldy to bring home, but it has been unwieldy for 18 years.  It currently lives in my office, hooked over the window crank handle.  Inconvenient when I want to open the window, but it still calls to me, saying "I'm so glad you brought me here." 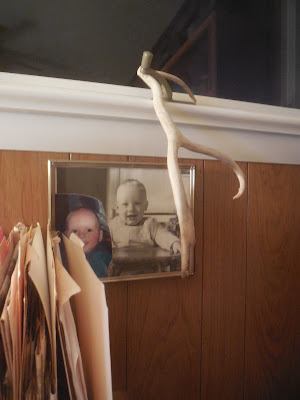 On the way home we changed planes in Reykjavik and Mom bought me these three little ceramic pieces at the airport gift shop.  They're small, the hallmark of a great souvenir, and adorable.  The church is 2 1/2 inches tall, and they're all about 3/4 inch deep and a bit wonky.  Something about the simple but jaunty structures always reminds me of that trip, a glimpse of a calmer, less complex time and place. 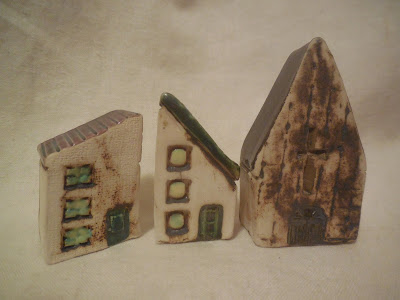