I received a Cuisinart for Christmas 1979.  Food processors were relatively new consumer items and I felt like a daring early adopter; didn't take long for the little machine to become an essential part of my life. It also didn't take long for the new models of the machine to start getting "upgraded" with features and gewgaws that I read about in ads and didn't think I would like.

By 1992 I had started to worry that my machine would some day die, and would I then have to buy one of these overpriced, over-accessorized models then on the market?  In particular, I had noticed that the new models were engineered to save me from myself, with convoluted "safety features" that would, for instance, not allow me to push new basil leaves into the machine while it was running, thus doubling the time to make a batch of pesto. 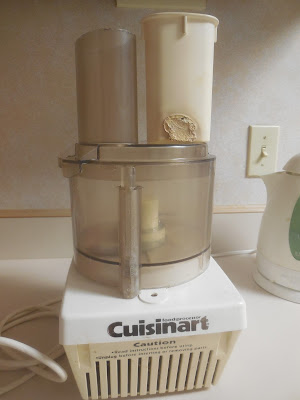 Fortunately my mother was downsizing, and had never loved her Cuisinart (the very same model as mine) enough to take it with her to the retirement community, so I called dibs on it.  Imagine my dismay when she and my sister phoned one afternoon to update me on their packing up the house, and they told me they had taken the Cuisinart to the Goodwill store that morning!  My shriek could have been heard in Virginia without the telephone.  They got in the car, went back to the Goodwill and ransomed the Cuisinart, which made its way to me.

Sure enough, my machine died one day, but I was able to haul Mom's machine out of the closet and set it to work.  I also ended up with two bowls, two tops, four blades and two pushers, which has forever made it easier to work without having to stop and wash up.

But the poor dear Cuisinart is showing its age.  I have no idea what I did to put that horrible burn/melt onto the pusher.  The bowls have ominous striations that look like the plastic wants to shred under stress; some of the little hooks and tabs that lock the bowl and top together have broken off; the spring sometimes sticks in the ON position instead of releasing when I turn the top; one of the plastic blades broke earlier this year; the cord has electrical tape wrapped around where it comes out of the base.  I figured this sort of thing happens in old age, but the Cuisinart, like me, would continue to soldier on despite aches and pains.

But last week something really bad happened.  I affixed the bowl to the base and the machine turned on, even though the bowl hadn't been turned into place to trip the switch.  The little red spot, right above the second I in Cuisinart, is a plastic membrane that protects a switch underneath; the vertical tube on the bowl has a spring-loaded piston that is supposed to depress whatever lies underneath the red membrane.  But it seems that the red membrane has disintegrated into cruddy bits, and that seems to be enough to render the switch permanently ON.

What to do now?  I made pesto the other night by inserting and pulling the plug out of the wall to turn the machine on and off.  Worked OK, but I feel vulnerable, especially when a spark flies upon pulling.  I guess life has really and truly run out for my wonderful machine.  I am too depressed even to start to research what is available in food processor technology these days; I'm afraid it will be just like in the late 80s, way too many protect-you-from-yourself features and way too expensive.  User testimonials welcome.

I do know one thing -- I have to figure out a way to incorporate this machine, or at least some of its parts, into my art.  It's been too close to my heart, too necessary to my life, for almost 40 years to just deposit it in the recycle bin.


Posted by Kathleen Loomis at 5:23 AM