We have a family rule of no gifts, except for extraordinary circumstances, so I was surprised when my son showed up shortly before Mother's Day three years ago to present me with a Kindle e-reader from him and his brother.  We were leaving the next day for Great Britain and the guys thought I needed a Kindle to stay in touch.  The best part of the gift was that my son did all the setup for me.

And indeed, I immediately fell in love with the device.  I could check email from our hotel in London, find a google map to plan our walking route, read in bed without turning on the light when jet lag woke me at 3 a.m., order up a new library book after I had read the three I loaded at home.  The only downside was that I couldn't upload photos to my blog, open attachments to email messages, or perform any online activity that required highlighting, cutting, pasting or anything else that you would ordinarily do with a mouse.  I've carried it with me on many a journey, and only occasionally has it done temper tantrums.

Until last week, when I got a message from the library that a book I had had on waitlist for some time was now available.  I went online and told it to download to the Kindle, then turned on the Kindle to start reading -- and nothing happened.  I plugged it in overnight but still nothing.  My son came over with his own Kindle and power cord and confirmed that it wasn't the power cord.  The Kindle was dead.

The new one arrived Friday afternoon and in a fit of independence I decided I would do the setup this time around.  And it only took an hour and a half! 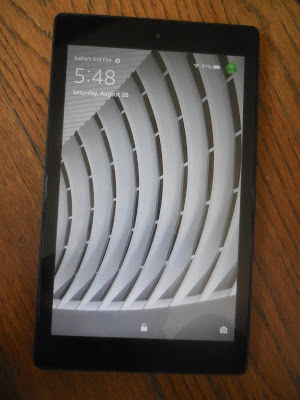 First I had to wait while my new modem/router took its time thinking about whether it would indeed let the Kindle connect to the internet, despite several attempts where it told me "no internet available." Much searching around to find the sales slip from the new router to entitle me to 90 days free tech help so I could ask them why the wi-fi wasn't broadcasting properly.  By the time I got myself organized for that task, I realized that the Kindle had apparently persuaded the router to let it on. Then I had to click around for ten minutes to figure out how to get my email online.  Here I knew the password, but I couldn't figure out how to access the right site (it was bookmarked into the old Kindle, but that didn't help....)

Now to the blogger site.  A month ago Google had a hissy fit when I tried to log in to my blog from a motel in the wilds of Ohio, deducing incorrectly that this was a hack.  It took me an hour of frustration before I was able to persuade them that it was indeed me, and to issue me a new password.  I thought I took the precaution of sending myself an email with the new password, as well as writing it down in a couple of different places.  I did in fact remember it long enough to reset my desk computer when I got home.  But yesterday I couldn't remember, nor could I find the email or any piece of paper with the new password.  So I had to ask for another reset.  That took the better part of a half hour to get resolved.

In all, I had to look up five different passwords in my notebook, wait for an email with a new one-time access code, reset that password, write it down in my notebook, and reset it on my desk computer.  I still haven't reset the new password on my laptop, which occasionally travels with me as well.

Technology is wonderful, I guess.  Before the Kindle I carried bags of books on long trips and searched out computers in hotel lobbies to check email.  And before computers and email we sent postcards, searched out the International Herald Tribune in tobacco shops around Europe, and didn't know whether our loved ones were alive or dead till we got home.  But technology doesn't come easy.

I suppose my granddaughter could have whipped through these setup tasks in five minutes, but I was happy that I managed it all by myself.  Now comes the second learning curve, figuring out how the new device differs from the old one.  You know it will, and you know that some of the features that I liked about the old one will have disappeared.  But I'm keeping a smile on my face.  I do love the damn thing!  I really do!  grrrr