The last time I taught a multi-day workshop I had the idea to ask my students to each give me a couple of leftover bits from their projects, and I sewed them together into a little souvenir quilt.  I enjoyed that exercise so much that I wanted to do it again at Quilting By the Lake.  But this time instead of asking for contributions, I decided to simply go around and raid the scrap bags at each table.

The last three days of the workshop were fine line piecing, but the scrap bags didn't acquire many bits with fine lines; I think many people packed up everything on their worktables to take home and finish their projects.  So most of the scraps I rescued were simply strips and pieces of solids.

I got a lot of piecing done during the workshop, and by the time I came home I had perhaps two-thirds of this quilt sewed, or in large modules ready to put together.  But scraps breed in the dark, you know, and whenever I thought I was about finished I would realize that there was still quite a bit of fabric there. 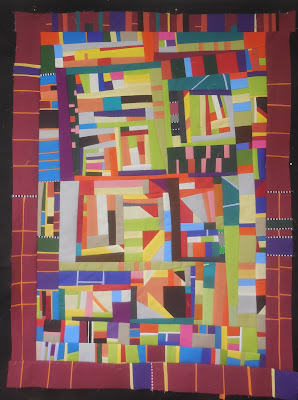 You can see how I added several long strips on various edges, expanding from the original center of about eight rectangular modules.

And you can also see how the quilt gained a final border when I found Jayne's scrap bag, which I had stowed in a separate place in my car and didn't come inside until yesterday.  Jayne had pitched a substantial chunk of maroon fabric with fine orange lines, which I cut up to make the dark borders.  There wasn't quite enough to go all the way around, so the top border is quite a bit more random than the other three, not to mention a half-inch narrower.

When I got the quilt this far I had to admit this was the end.  All I had left was a pile of truly miscellaneous scraps, mostly too narrow to accomplish much with.

I sorted through and found a small pile of pieces large enough to do something with, bagged them up neatly and put away. 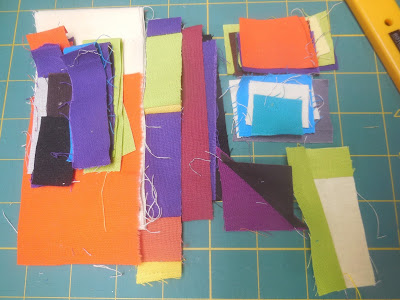 And then -- yes, I did -- I threw the rest away!!  The old Kathy would have dumped them into a grocery bag and stashed it underneath the worktable, just as I kept three bags of scraps salvaged from other people's throwaways for two and a half years after my last trip to the Crow Barn.  The new Kathy pitched this whole pile (not without a few second thoughts....) 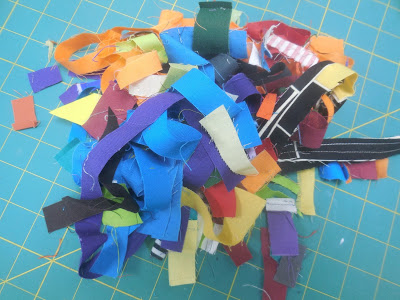