Many years ago, the League of Women Voters saved my life.  I was back from three years living in Germany, but feeling like a stranger in the city we had returned to; instead of a young single woman working at an exciting career, I was a slightly less young married woman with an almost-two-year-old, no job and precious little to fill the day besides library books, grocery shopping and changing diapers.  Life seemed not particularly rewarding, it didn't look like that was going to change any time soon, and I was feeling desperate.

My friend Dot Ridings, called me up one day and ordered me to come to a League meeting next week.  The next thing I knew, I had a job doing the newsletter and was thrilled to be able to spend several hours each week with adults talking -- and doing something -- about affairs of substance.

Dot went on to a distinguished run as national president of the League of Women Voters and several other high-power posts in journalism and non-profits, but at the time she too was a young mother, on leave from her own career and searching for something meaningful to fill the gap.  She told me the League had saved her life, and if would save my life, and she was right.

The League became so important to me that after my second child was born, we detoured on the way from the hospital to visit the office before he even got home.  The first child remembers fondly being a brat on camera while I was being interviewed by a TV reporter about voting procedures.  Both children remember stopping off at the polls on the way to or from school so they could be lifted up to "help" me vote; sometimes the whole carpool got to "help."  The League had a little dummy voting machine, about the size of a ream of paper, that I would take to school for demonstrations as election days approached. 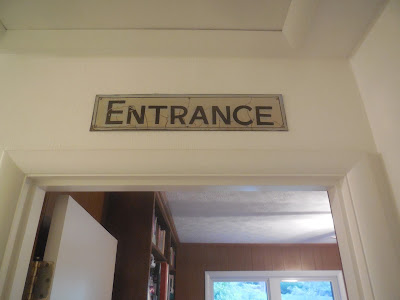 Eventually I held practically every job there was on the local board, including president, and when we had a major remodeling job, I rescued this sign from the dumpster, and now it hangs outside my office.  It had hung over the back door of the League building for decades, inviting women to come in and put their formidable, but so often underutilized, talents to work for the public good.  It's hard to remember how quickly society's expectations have changed, how within my own adulthood the majority of educated women did not have paid employment, did not have that many outlets for their energies and intelligence and ambition.

For so many other women, as well as myself, the League -- and other volunteer organizations focused on social change and good works -- was indeed an ENTRANCE to a world in which our skills and energies were developed and appreciated.  I treasure those years of volunteer work and the organization that was, and is, almost always on the right side of every issue.  Would that today's political scene still valued the informed participation of citizens in government.

Posted by Kathleen Loomis at 5:01 AM