My mother acquired three old kitchen chairs that had belonged to her grandparents, but the caned seats were deteriorating.  Once my father's supremely handy aunt and uncle were visiting and the chairs came up in the conversation.  Well, heck, it's no big deal to recane a chair, they said, and took them home with them to Indiana.  Mom insisted on paying them, despite much argument.

In the fullness of time the chairs returned, beautifully recaned.  But Mom had a conniption when she realized that it was plastic "cane," not real.  That had not come up in the conversation. 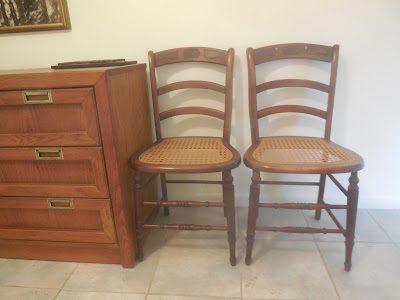 Mom thought that plastic had defiled her grandparent's precious chairs, and indeed, their precious memories.  She berated herself for not having specified authentic cane for the job.  She couldn't stand to even look at the chairs and stashed them in the attic.  We talked about this one day and I said, I'm sorry you can't stand to even look at them; I think they're pretty nice.  If that's what you think, she said, you can have them.

So the chairs came home with me and have been making themselves beautifully useful for a long time.  One served as my sewing chair for many years.  After we bought elegant upholstered chairs for our dining room, and I realized the seat was too high for me to get my feet comfortably on the floor, I sat in a caned chair for a decade, even though it didn't match anything else in the room.

Currently two of the chairs reside in our front hall, convenient for depositing the mail, the newspaper, a package on the way to the post office, or your hat and gloves. One lives in the dining room, ready to be slotted in when we need to squeeze three people along one side of the dining room table without putting in the extra leaf.  If we need one someplace else, they're light enough to be carried all over the house.

For a while I shared Mom's opinion of the plastic cane, even while welcoming the "ruined" chairs into my life.  Then I decided that plastic was probably an excellent choice for chairs that were going to be seriously used.  In 30-some years it hasn't faded, stretched or frayed.  It doesn't scratch your legs if you're wearing shorts.  It looks sharper than the rest of the chairs, whose carved ornamentation is starting to lose its veneer.

So Mom, you were wrong to disdain the fix-up job.  But you were right to let me have the chairs!